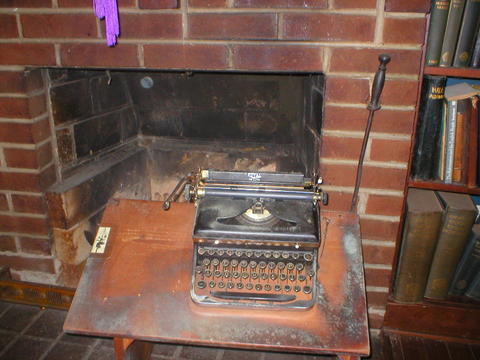 Sheldon VanAuken’s Typewriter on which was written A Severe Mercy.

I have a small, tattered, beige paperback. It is one of my most treasured books. I read it again every year or so. I was so moved by the story in it that one night in 1987 I picked up the phone and called the author. He has since died. His name was Sheldon VanAuken. The book’s title is A Severe Mercy.

There is a touching passage in the book where he speaks of the days he and his wife Jean Davis, whom he calls Davy, lived in a small apartment in England while he studied at one of the colleges of Oxford. It was there that they came under the influence of Christian friends and the teaching of C. S. Lewis. It was there in the shadow of the spires of Oxford that they came into the arms of Christ.

Their apartment was a studio so by the creative use of punctuation they referred to it as St. Udio’s. In the evening when their friends would have to leave they had a traditional farewell. They would say to each other “Go under the mercy.”

“The phrase comes from Charles Williams, and we all used it- indeed, still use it, some of us, after the years. There would be a halo round the gas lamp in the lane, and the slight English rain like a mist, and the cobblestones of the lane would be glistening. “Goodnight, go under the Mercy.” And a friend would say perhaps “Sleep under the protection. Goodnight.” And then the sound of heels marching away into the Oxford night and perhaps bells marking the midnight.” (A Severe Mercy, Sheldon VanAuken; Bantam Publishers, New York, 1977)

Wherever we live and wherever we go we ultimately have a choice of one of two directions according to the clear teaching of Scripture. The Gospel of John says “He who believes in the Son has everlasting life; and he who does not believe the Son shall not see life, but the wrath of God abides on him.” (John 3:36 NKJV). We abide under the just wrath of God because of our sin, or we “go under the mercy” because of Christ.

God of the Fallen Sparrow

The Grace of Receiving