I’ve never told you about King and Grit before, have I? Well I think it’s time you knew. Every boy dreams about having a loyal dog that will follow him everywhere he goes and come when he calls and sit up and beg and fetch and roll over. I always wanted a dog like that. But my dogs got killed on the road a lot. With my dog’s high mortality rate, I had to come up with creative alternatives for pets.

I had a little chameleon once, a white mouse or two (one of which we named affectionately “Jim” after an uncle we all loved. My Grandmother never really appreciated the honor), a hamster, cats, goldfish, and two pets that my mom hated with every fiber of her being. King and Grit.

King and Grit didn’t eat much, they were clean to a fault, they didn’t make any noise or take up much room. Even though they didn’t sit up, beg, roll over, fetch or heel, they were my pets. But they kept my mother awake at night. She would lie awake at night and imagine King and Grit slithering out of their cage and attacking her in her bed. (We could do nothing to convince her that a garter snake has no way of attacking, but our faultless logic was no match for her irrational fears). 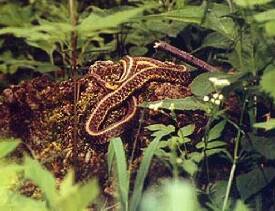 I thought it would be good for her to just learn to deal with my pet snakes. I thought it would be inexpensive therapy for her neurosis, but she just didn’t see it that way at all. She wanted my snakes out and she was not going to rest until they were gone, preferably removed a few states away in case the creatures had some kind of homing instinct.

One day King died under mysterious circumstances (We’ve never really gotten to the bottom of this to my satisfaction), and shortly thereafter Grit disappeared when I left his lid ajar. Later my Dad hit him with the lawn mower or at least produced the remains of a similar snake to the satisfaction of my mother who was even more convinced he would get her in her sleep since he was at large.

King and his spindly little brother Grit really were harmless but not all pets are. We have all been horrified by news reports of children, even babies being mauled and killed by Pit Bull dogs or attacked by huge, killer snakes. I have never understood why a person would want to keep a pet that had such potential for harm. To me it seems like just another manifestation of depravity unleashed.

Just this week a little four-year-old boy was killed by his father’s dog a dangerous 90% wolf 10% shepherd mix. On the way to the hospital the father said; “I told him to stay away from the dog.” As foolish as it is, there are Christians who coddle poisonous, dangerous pets. They nurture and feed, pamper and pet habits that one day will turn on them and do them great harm. If they escape injury their children will, in many cases, fall victim to the deadly pets they keep.

A bottle or six-pack set-aside for a special occasion

The “harmless” sitcom or “soap”.

A hit-and-miss pattern of church attendance

Spending the Lord’s day doing our own thing and giving God a casual tip-of-the-hat.

Hobbies that rob God of what is His.

A desire for reputation that keeps us from ever going “all-out” for God.

Greater concern for your reputation than your character. (It’s not as important what men think about you as what God Knows about you.

Any good thing that interferes with your duty to God

An inordinate love of material possessions

It is not my desire to overemphasize external things, but some of these habits and characteristics have a way of exposing inner needs. Paul often used external things to diagnose the diseases of the soul.

King and Grit were really not capable of hurting anyone. My dad always said they are more scared of you than you are of them, but the same cannot be said for our formidable adversary, the Devil.

If Satan can “bind” you and “spoil” your house, he will. His intent to steal, kill, and destroy, and he would love to add your children to the millions of the damned who will populate Hell throughout eternity. Don’t encourage him! Don’t assume you can keep poisonous pets without injury, it could be a deadly error in judgement.

Be sober, be vigilant; because your adversary the devil walks about like a roaring lion, seeking whom he may devour. (1 Peter 5:8 NKJV)