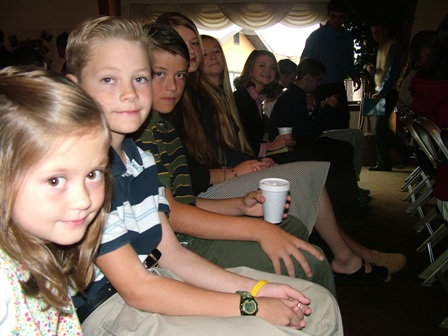 When I was in school I craved the admiration and attention that came with being a star athlete but I lacked the skill and especially the confidence to become one. Sadly it took many painful and humiliating experiences to convince me that I didn’t have a future in athletics.

At ten I failed to make the Little League team and was assigned to a farm team. I was a pitcher because I was one of the bigger boys. Most of the boys my age made a Little League Team. I could throw the ball hard but it was always a mystery where the ball would go. I hit or walked most of the batters I faced. Once I even tossed the ball over the backstop. The coach came out trying to look serious and broke into laughter when he reached the mound. He said; “in all the years I have coached baseball I have never seen that before. (I bet he never saw it again either). The score of those games was usually 20 or 30 to not many at all. The highlight of our year was when we played Lakeview. They must have been having a bad night. We tied Lakeview 17-17. The coach bought us hot dogs and ice cream and we celebrated wildly. That was the only positive memory I have in sports until I reached college.

When I was in the seventh grade I thought I had a good chance to make the basketball team. I would go to the school and shoot baskets until well past dark to increase my chances. I read books about basketball, ran and tried to eat healthy food. Tryouts lasted a week and they posted the names of those who made the team on the bulletin board in the locker room. I searched the list for my name but it was not there. My eyes began to blur with tears and I cleared them hoping I had overlooked my name. It was still not there. Choking back tears I cleaned out my locker and walked home in the cold darkness. The coach never spoke with me about it. No one said a word to me. My name was not on the list and I walked home.

I wasn’t big enough to play football for the school in the seventh grade. We didn’t have the money to play pee-wee football in the community program. When we moved to Ohio my biology teacher was the football coach. He asked if I wanted to play football. I desperately wanted to play football, but I couldn’t get a ride in town to play. In the eighth grade I practiced with the team and we all suited up. There were no cuts but the coach made it clear that I would never see any game time. I tried out for basketball again in the eighth grade and my chances of making the team were good but one night the heckling and humiliation in the locker room got to me and I stormed out hurt and angry. Once I briefly joined the wrestling team until the boy in my weight class who was injured recovered. That ended my brief wrestling career.

We moved often so I was always the new kid in school. Every time we went to a new school we had to fight to determine the “pecking order” again. This was always painful. My clothes and my hair were not in style and I talked too much. This usually meant that sooner or later I would be used for a punching bag.

When others would challenge me to a fight on the way home from school I almost always took a beating overwhelmed by the feeling that everyone was pulling for the other guy. I never told my parents because I was ashamed that I wasn’t better at defending myself. If I did defend myself I would lie in bed at night burdened with a sickening feeling of guilt for hurting someone else. I remember constantly thinking. “I want people to like me. Why is it that people don’t like me? There must be something really wrong with me or people would like me.”

One incident stands out in my mind occurred one day during lunchtime. I went to the gym to shoot baskets. It was usually hard for me to get into the game. No one wanted me on his team. On this day though they quickly welcomed me. Soon I realized something was wrong. I could tell they were plotting something. They were setting me up to smash the basketball in my face and pretend it was an accident. When I realized what they were doing I walked out. When I neared the door someone took the basketball and threw it overhand as hard as they could at me. The ball missed and slammed into the doorframe next to my head. They followed me into the hallway cursing at me and trying to goad me into fighting. I knew I could never win so I kept walking. Over and over again one of them slammed his fist into my ear cursing me and mocking me. Finally in humiliation I went to the school office for protection. They were never disciplined. Thinking of them filled me with rage and bitterness.

One young man in my school continually tormented me beating me whenever he caught me alone. Once he covered my arm with bruises pounding his fist into my arm over and over again with all his might. He was a mean street-wise kid much bigger than I was and even though he was only in Jr. High he was old enough to have facial hair. The others, and there were always others, just laughed and urged him on. I always felt helpless, vulnerable, lonely and bitter and I wondered why he hated me so much. I was convinced that there was something wrong with me.

As the years passed and I grew older and bigger, life became a little less threatening and a little more friendly. I discovered some things I could excel in. I gave up my dreams of athletic glory. I was verbal and musical and people told me I was a pretty convincing actor. I gathered a few friends who accepted me for who I was. But when I thought of this young man, bitterness still flooded my soul. Even years after we had moved away, the memories of those humiliating times would come back to me and make me wonder what was wrong with me that would make someone so eager to hurt me. Eventually I knew I needed to empty my soul of the anger and bitterness. It helped me to realize that my beatings had more to do with what was wrong with them than it had to do with what was wrong with me. I wanted so much to be loved and accepted that I would do or say odd things that called unnecessary attention to myself. Others who were not emotionally healthy would take advantage of me to make themselves look better in the eyes of their peers. No one would stop it because they didn’t want to be embarrassed.

As I grew older and began to understand people more I realized it is always hurting people who hurt others. The best way for me to keep from becoming the kind of person who hurts others is to deal with the hurt that had lived in my own soul for years. This very real but quiet healing came to my heart when I released others for the pain they had inflicted on me.

Many years and many miles separated me from the small town were I had been so abused. I became a pastor and eventually made my way back to serve a church within ten miles of the little village were my tormentor lived. One night I decided to find him and to try to explain to him how he could be free from the hurts that drove him to such cruelty. A few inquiries led me to the front steps of his house. His wife answered the door. I remembered her as one of the sweetest girls in the school. He wasn’t home yet but she invited me in to wait for him. While we waited she introduced me to their children. I began to speak of spiritual things and she assured me that she knew the Lord. To my delight she also informed me that recently her husband had also come to Christ. We enjoyed some fellowship there and talked about school. Soon He drove in and after years of painful memories we were face to face again. When I saw him I was shocked at his size. I’m sure I was a foot taller than him and fifty pounds heavier. I introduced myself and asked if he remembered me. No, I don’t. I was shocked. I said, “You don’t remember me? You used to beat me up all the time.” He smiled and said; “That must have been before you grew up…”

As I drove away that night I reminded myself to be sure and teach my children not to be bitter or discouraged by the wounds that they are dealt in their youth. The giants you face in your youth lose their power to intimidate and destroy as long as you don’t allow them to poison you with bitterness. The power of love and forgiveness is the best way to overcome and enemy. And you sleep sweeter at night.

The Lost Art of Skipping