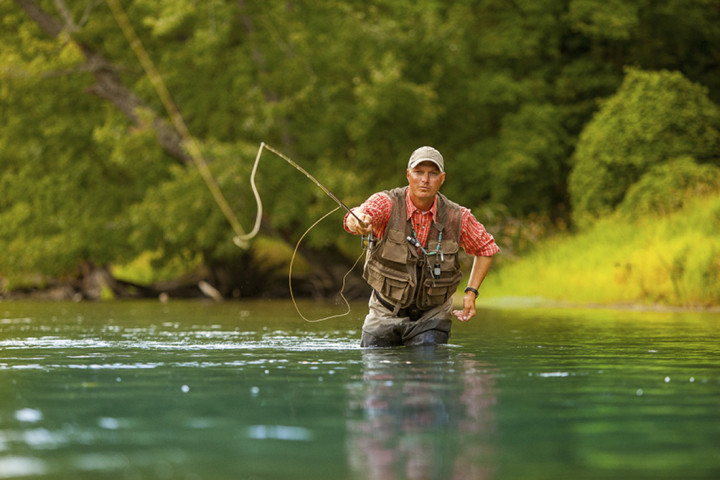 I don’t have too many successful fishing stories to tell but I have had a few evenings on the water with my boys that will be hard to forget.

On a beautiful autumn day a few years ago we went with some friends to float the Muskegon River not far from our home. It was during the Salmon run and it was something to behold. We lived near world-class tail waters of Lake Michigan were Salmon as big and nearly as fast as torpedoes cruise the river in the fall. There were seven of us on the river together that day. Tim and three of his sons, myself, Kyle and Chuck.

Our plan was to put in just below the Croton Dam and float down a few miles fishing and enjoying the bracing autumn day. We had taken up fly-fishing but Tim had rigged a spin-casting rod with some spawn we had gone on ahead with the younger boys while the older boys were taking their time seeking out fishing holes. They had Trout in mind. We were mostly canoeing with plans to take a few Salmon if they were trying to jump in the boat. The older boys had fly-rods and they were mostly ignoring the Salmon and fly-casting for Brown Trout and Rainbows.

The first time I saw a Salmon cruise by upstream I was shocked at it size. It was a very big, very fast fish. But about an hour into our trip we rounded a bend and ahead of us three or four huge Salmon were churning the water like a washing machine. It was a spectacle impossible to ignore. I quick grabbed the rod and began frantically casting into the pool. For the next few minutes it was like we were taken with a fever. Tim and I are both professional men but we lost all reserve and reflection and began to flail the water with our lures. My first cast landed on the bank and the second cast snarled in an overhanging tree. Tim waded over into the whole to get my line free while I made wild gestures up-stream so the boys would know we had found a hole inhabited by monster fish.

Up-river the guys saw we were into something and they began to paddle fast to see what it was. By the time they were close enough for us to gesture to indicate the size of the monster Salmon, the big fish were gone and the hole was as still as a church on Monday morning. In our enthusiasm to land a big fish we had so fouled the hole that there would be no fishing there for the rest of the afternoon. The worst part was that we had to put up with the boys ribbing us for the rest of the day.

Jesus called himself a fisher of men and he expected that all who consider themselves his disciples would follow him in the same pursuit. If we are not careful in our eagerness to catch men for God though we can drive them away. This especially happens when people don’t feel that we genuinely care for them. When they sense we see them as a project or a Sunday School assignment we are clumsy fishermen. When we just unload our canned speech on them while we are keeping them at a distance relationally they will usually not really hear with their hearts. We want to be ready to give the message of the gospel. Without it no one will ever have eternal life. We need to tell it well and tell it often, but if we are not careful to accompany the words of the gospel with the music of genuine love we will foul the hole and ruin the fishing.