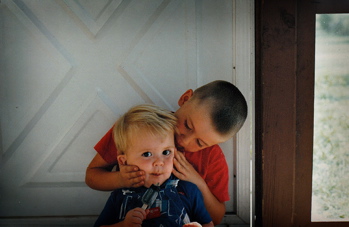 Chuk, our third-born child, second-born son, will turn nineteen on November 29, 2004. When he was small he was especially top-heavy. He had a big head when he was a little kid and it has taken him years for his body to catch up to his head. He was really a cute kid but he was as tipsy as a weeble, so top-heavy he just couldn’t stay on his feet.

When he was very small he jumped off the kitchen counter one Sunday morning. He recovered from the fall without needed medical attention. A few weeks later he tumbled down a flight of stairs into the basement in a walker. Other than his being a little slow it didn’t seem to have any effect on him.

One of his funniest tumbles was after a little feast at Taco Bell. We were walking to the car. Chuk’s little arms were inside his shirt because the air conditioning was too cold. He tripped on the sidewalk and whet down like a sack of potatoes. With his arms in his shirt he had no way to catch himself so he just tucked one shoulder and rolled on impact. He wasn’t hurt but we laughed so hard it hurt our sides. Again, other than the original mild brain damage, he seemed unaffected by his fall.

I was late for church one Wednesday night and took off before I made sure little Chuck was safely belted in. He was standing up in the “way back” of the station wagon. When I turned the corner and accelerated onto the highway he went crashing around the back of the car. It struck me as funny and I couldn’t stop laughing but Lois was not even mildly amused.

Three times he had to be sown up after a fall. Once when he was chasing a ball he fell against a door and opened a gash in his forehead you don’t want me to describe. (Chuk’s first word was “ball” and every time he saw one he went into gyrations. He was happy to risk injury to get one. When he played short stop in Little League he would wait on a slow grounder so he could dive and backhand it like Brooks Robinson).

Another time he was just a little shaver and we were walking through the grocery store. He heard that we were going to buy pop cycles. In his enthusiasm he whirled around and ran strait into the shopping cart with his face. That one required needlework, too.

About three years ago he was riding a bike on a half-pipe at a skate park. His bike malfunctioned (imagine) and he came crashing town on- you guessed it- his face. Have you notice a pattern here. One thing you can say for Chuk, he may fall but he will land… on his face.

About a year ago before Chuk had turned eighteen he decided he would like to try to knock-down some college credit working here in the Verity program. He was younger than all the students but he gave it a try. I told him if he passed I would buy him a latte at Starbucks to celebrate.

When he took his first test, though he failed by a few points. He was discouraged and I could tell struggling with defeat. I was a little afraid we had made a mistake encouraging him to start so soon. When he told me he failed he was so dejected. I said, “Chuk, hop in the car. We’re going to Starbucks to celebrate.”

“To celebrate what, Dad?”

“Chuk,” I said, “We are going to Starbucks to celebrate your amazing potential. You can do this. You are just going to have to give it more than you have. It’s not going to be easy. You know they don’t just give away credible college degrees.”

So to Starbucks we went and we celebrated his amazing potential in faith. And then he came home and stalled for a few months, probably afraid to try again, but in February he took another test and he passed. Since then he has been passing tests regularly. That was less than a year ago and Saturday night he received word that he had passed another college level exam. He now has earned a total of 63 credits in less than a year. He is past the halfway point toward a degree that takes most people at least four years. Not bad for a kid who lands on his head regularly is it?

UP-DATE: Chuk went on to quickly acquire all the credits needed for graduation and then he stopped without finishing his last class just to show you don’t really need a BA to make it in life…

A Gentle Place to Fall