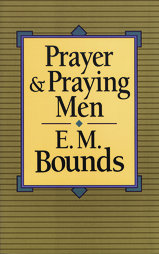 When I was growing up my Dad pastored a little country church on a edge of a tiny village in Ohio. In that church young and old alike were together for prayer meeting on Wednesday night. We would sing a hymn or two and Dad would teach and take prayer requests. He would read a missionary prayer letter or two and then divide into two groups. The ladies and the girls would come to the front and the men and boys would go to the back. We would get on our knees and pray.

The image of men on their knees in prayer on a summer evening, windows open to the cool night, is still sweet to my memory. I was about ten years old. I watched the men when they would pray, squeezing their eyes together and pouring out their souls to God. One evening I watched one of the older men of the church kneeling at his pew. Tears ran down his face and dripped off his chin while he prayed.

When I think back on those summer nights in prayer meeting I am reminded of what E. M. Bounds wrote on praying men over a hundred years ago:

“WE are constantly on a stretch, if not on a strain, to devise new methods, new plans, new organizations to advance the Church and secure enlargement and efficiency for the gospel. This trend of the day has a tendency to lose sight of the man or sink the man in the plan or organization. God’s plan is to make much of the man, far more of him than of anything else. Men are God’s method. The Church is looking for better methods; God is looking for better men… When God declares that “the eyes of the Lord run to and fro throughout the whole earth, to show himself strong in the behalf of them whose heart is perfect toward him,” he declares the necessity of men and his dependence on them as a channel through which to exert his power upon the world.

What the Church needs to-day is not more machinery or better, not new organizations or more and novel methods, but men whom the Holy Ghost can use — men of prayer, men mighty in prayer. The Holy Ghost does not flow through methods, but through men. He does not come on machinery, but on men. He does not anoint plans, but men — men of prayer.” (E. M. Bounds, Power through Prayer)

We have camps and conferences and clubs for children. We have children’s books, software, video games, and cleaver Christian films aimed at them. We have catchy music and Christian action heroes for children. We have singing vegetables and Bible action hero dolls. But more then anything children need to see their fathers bent in humility before the Lord. They need to know some praying men.