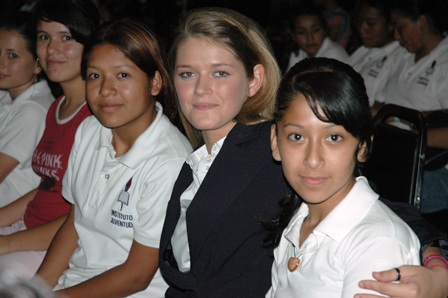 A I write this it is after eleven on a clear, cool night in Lake Chapella, Mexico, near Guadalajara. There is a full moon in the trees over the cluster of humble buildings that is the Oasis Orphanage.

Tuesday evening we left Big Sandy at about 8:30 and drove all night into Mexico. We were delayed at the border for hours. When we arrived in Monterrey we visited an orphanage and did a program of music, speaking, and testimonies. We ate there and then we had a meeting with a business leader in a restaurant high over the City of Monterrey. It was delightful fellowship, good food that reminded me of Fonda Mexican in Melbourne that I had once, an incredible view of the lights of the city and an important meeting. We joined the team and started toward Horsetail Falls.

Thursday it was up early and back down the mountain for a ministry in the city of Garcia. We did a presentation and testimonies in front of a group of 600-700 students. We had lunch with them shouting over a blaring rock group. But the rock group was on competition for the group of fifty radiant, godly, well-groomed young people talking, eating and riding the mechanical bull. During luch we received permission to do a chalk talk demonstrating and over two thirds of the students returned for the voluntary session.

We spent the evening with Christian and government leaders and workers in one of the most beautiful homes I have ever seen. We were hosted on the lawn and in a huge patio with catered, authentic Mexican food. We arrived back late that night singing and memorizing scripture on the bus. We would be driving from Monterrey to Guadalajara on Friday. On the bus we sang, prayed, memorized scripture, studied Spanish. Mr. Gothard keeps up a running classroom of wisdom. It is delightful to be with him and to hear his way of seeing things. Even though we have had difficulties on the trip, he refuses to be overcome or discouraged.

We arrived in Chapella at about five this morning. We left Horsetail Falls in Monterrey at about 11:00 a.m. It was a beautiful day to travel and the drive from Monterrey wove for hours and hours through the mountains along a tollway, the main road from Monterrey to Guadalajara.

When we arrived Nelda, who runs the orphanage with her husband, showed us to our room, a modest but lovely upper room with a private bath over the chapel. The young people were distributed around the various buildings.

I slept from six to eight-thirty this morning and when I rose and walked out onto the roof next to our chamber team members were already milling around doing chores without being asked.

Today we served a steak fry to dedicate the new Hispanic Trainging Center/Office on Guadalajara. It was a beautiful opportunity to meet new people who are interested or have already been greatly helped by the work of IBLP.

We are at the end of an exhilarating and exhausting day. Lois and Hope are soundly sleeping and I am ready to join them in our upstairs chamber here at the orphanage in Chapella, Mexico. Chapella is a lake community a half hour south of Guadalajara, the third largest city in Mexico.

Tomorrow we will minister in two orphanages and serve ice cream on the streets for Mother’s Day. We will be up late. Here in Mexico they do not seem to subscribe to the “early to bed, early to rise” axiom.

Monday morning we will visit and huge orphanage with thousands of children. There are some significant work projects here at the orphanage including plumbing, painting, trenching, electrical, and artwork. You could probably have guessed that I will be on the trenching crew.

You would not believe how well these young people can sing. It is a fifty-voice choir, not just singing in harmony but in great oneness of spirit as those who are warring together against the powers of darkness for the gospel.

Snow on the Mountain

Do You Ever Do This?