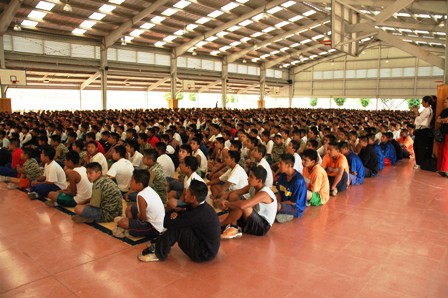 Monday morning the team did a four-hour assembly and meeting at a boy’s school. I have never seen anything like it. There were 2000 boys assembled there all in strait rows. Each boy was on a large team and the teams could be identified by the color of their shirt. They listened attentively. When the assembly is over the students mob the team members and eagerly listen to every word you say. I have never been able to share the gospel with so many so simply. I just grab and interpreter and go to town. I have gathered many names of young people and children who are eager to correspond.

Mr. Gothard arrested the attention of the entire sea of young Mexican faces by offering a cash gift to the one who could tell him the secret of success. About a dozen young men tried, running to the platform to give the right answer. None of them were quite right. For a good answer they received two dollars each. While the boys lined up the team members emptied their pockets of “ones.” The prize reached one hundred dollars which drew loud cheers from the boys, but not one boy of the two thousand could tell the secret of success, even after Mr. Gothard told them that it was found in the Bible.

He then gave the 100.00 bill to the leader of the school and promised the boys that at the end of the assembly he would tell them how they could win the one hundred-dollar bill. At the end of the assembly he promised that the first boy to memorize Matthew 6 would win the prize. I sensed that the Lord gave Mr. Gothard the idea on the spot, later he confirmed to me that I was right.

We sang and shared a chalk talk and the students gave testimonies and did skits. Horhito Rubalcaba and Josh Rodrigueuz gave testimonies in the assembly and they were especially effective because they were young men and because Spanish is their mother-tongue. After the assemble the boys gathered around us in big clusters and hung on ever faltering word. The leaders invited us back and expressed a desire for the Basic Seminar and materials.

Nelda, whom is call Abuela (Grandmother) presides over the operation of the orphanage. She has a big heart and her staff love her. She “catered” a nice lunch to the Guadalajara Training Center (IBLP Latin American Office) for the team. The team enjoyed the food and sun and fellowship. Mr. Gothard gathered the team for a prayer meeting and listed over dozen major things for which we are seeking God.

Monday evening the team gathered back at the Oasis Orphanage. We were able to get some rest, food, fellowship, and recreation. They have been going at ministry so hard they have not had time to tidy their rooms so before diner they made their places neat. For diner we enjoyed a very good dinner of enchiladas, refried beans, and rice. I noticed appetites were hearty as on the Lord’s Day the team was preoccupied with a day full of ministry and only ate one meal and the food was abundant and very good.

After diner they played soccer. Children from the town gathered at the gate and watched curiously. Some of the team members talked with them and shared candy with them. As the cool evening came on the breeze moved the trees, the waning moon was nearly full overhead. At the end of the day the team gathered for instructions for their service on Tuesday and then spent some time filling the air with beautiful songs. The team is a powerful fifty-voice choir.

Monday night was a much-needed full night of rest. On Tuesday morning we breakfasted on bananas, juice, coffee, and stacks of whole wheat pancakes, all-you-can-eat. We broke into teams and spent the morning picking up trash and visiting with friendly locals. In the afternoon the plan is to go to the Training Center for lessons and teaching. In the evening the team has a permit for an open-air meeting on the town Plaza in Chapla.

While gathering trash I spoke to an elderly lady and invited her to the meeting. She said, “I will be there because I go there every night. It gets hot in my house and I like to go where the breeze is blowing.” The evenings on the town plaza are very pleasant and it is their custom to gather. It is not difficult to talk to people here.

Thanks for praying. Everyone is well. Our young people are a beautiful, dynamic, joyful team. They arrest the interest and attention of people wherever they go. They work willingly. The young ladies, with very simple facilities, groom and arrive on the bus at exactly the appointed time. I would not believe it if I didn’t see it myself. There is a unique spirit of oneness among the team members.

So until my next up-date, thanks for praying. Grace and Peace to each of you.

Wrestling Poverty in the Cold