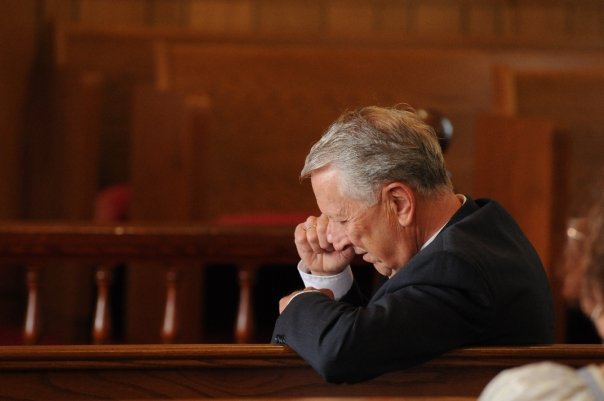 A few years ago this article was published in the Baptist Bulletin. I include it here as a Father’s Day tribute to my dad, Kenneth F. Pierpont.

You probably don’t know my Dad. He doesn’t have a radio program. He’s not a published author. He doesn’t oversee a large staff. He’s never been the keynote speaker at the conference. He’s always been a full-time pastor but he has often also been a full-time schoolteacher or Christian School principal or even church custodian at the same time.

His specialty has been new church plants or recovery works. Over the years he’s been attracted to churches that don’t interest other men. He has always run his own bulletin. (Years of that on mimeograph machines, which should qualify him for a special crown). He does his own building maintenance. He watches the thermostat on the hot water heater and the thermometer in the church building during the week in order to be a good steward of God’s money.

He always does yard work in a tie, so he can quickly get to the jail or the hospital or the home of last week’s visitor. I’ve been with him dozens of times when he has gone miles out of his way to get a carload of children who were not welcome at other churches. He is a tenderhearted man with a special interest in the unlovely. I’ve been with him on calls where he doubled as a plumber or auto mechanic. Wherever he has gone he has served faithfully with integrity and diligence and he has made a mark. The mark has been modest, but eternal.

Observing my Dad over the years has forced me to carefully evaluate what it means to be a successful man. In the world, if a man has a combination of wealth, strength, athletic ability, sexual attractiveness, position, respect, power, and influence; if he has the right toys and the right image, he is considered successful.

Many men have an insatiable lust for success. They are driven to achieve it. They thirst for its rewards. They fantasize about it. They sacrifice for it. Millions will sacrifice their family, their integrity, their leisure, their health and their peace of mind just for a taste of the coveted nectar of success.

There are many, however, who cannot seem to put all the pieces together. These men sometimes fake it. They try to surround themselves with the accouterments of success. They borrow to buy impressive wardrobes. They live beyond their means. They swagger and brag in a kind of pitiful bravado. They sit at the feet of motivational hucksters and pop-psychology gurus hoping to find the right combination of factors that will catapult them to the pinnacle of personal success.

There are casualties in this war for success, men lie wounded on the battlefield like so much twisted smoldering wreckage. For every man who dons the decorations of the war hero and marches in the parade of popular adulation, there are a thousand who join the grisly carnage of failure. These men consider themselves worthless, inconsequential, “also-rans”, rejects on the scrap heap of humanity. They curse their fate and become hostile or they just plod on through life with a spirit of pitiful resignation.
But there are thousands upon thousands of men who have achieved success who completely break the conventional mold. These are men who seem to be playing the game of life by an entirely different set of rules and they are winning! They are not necessarily handsome. Few of them have acquired wealth. They are not usually athletic or even in particularly good physical condition. They are certainly not in envied positions of power.

They do not jet around the country or command hearings with important people. They do not boast of great sexual conquests. They usually live in obscurity. They may have very limited abilities. They are not all highly intelligent. These men are successful, but they will never make the cover of a magazine or be featured in Television interviews. Their achievements are modest. They will live and die unknown beyond their immediate circle of family and friends, but they will taste the sweet fruit of success.

A successful man has a certain spiritual vitality. He has cultivated his inner man to the point that there is an obvious spiritual radiance about him. He seems to live life on a higher plane than most others. He has a deep resonant purposefulness about him. His energies and schedule, his conversation and use of money seem to drive toward that purpose and work in harmony.

He is a man of integrity. He can be depended upon to consistently do what is right. He inspires trust and confidence in people who do not even know him well because his eyes are clear. Those who do get to know him are not disappointed because his is what he appears to be.

-He is honest but not pseudo-pious.
-He is confident but not arrogant.
-He is meek but not vacillating.
-He is generous but not foolish.
-He is humorous but not frivolous.
-He is spiritual but not detached.
-He is firm but not abrasive.
-He is strong but not rough.
-He always gives more than he takes.

He fails, he sins, he has personal weaknesses and character defects, but he admits his failures, right his wrongs, and he is quick to seek forgiveness.

He is constantly working to develop his personal character. A successful man knows the love of his family. He has won the admiration of his wife and the affection of his children. His wife and children want to please him because he has devoted his life to serving them.

His home is in order. It is not without its share of sickness and disappointment, financial challenges and emotional cycles, misunderstandings and pressures, but he is able to bring an inner tranquility to it.

He is purposeful and proactive. He knows where he is going and what he needs to accomplish. He ruthlessly insists that every activity contributes to the over-all goal.

Why is he successful? How did he achieve this profile. What is the principle that unifies all that he does? How does he avoid the dangerous alluring traps that claim so many of his peers? How does he keep from being distracted by pleasures which seem innocent but damage his home, disappoint his friends, and destroy his soul?

His secret is that he is at one with God through the Lord Jesus Christ. He has exchanged his own will for the will of God. He has made the word of God the continual meditation of his heart and the ways of God his consuming desire. And because of that, though the culture in which he lives may not recognize it, he is a successful man. That is consistent with the sweet promise of the first Psalm. He shall be like a tree Planted by the rivers of water, That brings forth its fruit in its season, Whose leaf also shall not wither; And whatever he does shall prosper. (Psalm 1:3 NKJV)

My Dad is like that. Foot soldier in the army of God. I’ve had four decades to consider what it means to be a successful man. I used to wonder if Dad was one. The best way I know to summarize my conclusions is in the words of a lovely old song:

Does the place you’re called to labor seem so small and little known
It is great if God is in it. And He’ll not forsake his own.
Little is much when God is in it.
Labor not for wealth or fame.
There’s a crown and you can win it,
If you run in Jesus Name.

That’s a song that harmonizes with Peter’s words: The elders who are among you I exhort, I who am a fellow elder and a witness of the sufferings of Christ, and also a partaker of the glory that will be revealed: Shepherd the flock of God which is among you, serving as overseers, not by compulsion but willingly, not for dishonest gain but eagerly; nor as being lords over those entrusted to you, but being examples to the flock; and when the Chief Shepherd appears, you will receive the crown of glory that does not fade away. (I Peter 5:1-4 NKJV)

Kenneth L. Pierpont is the Sr. Pastor at First Baptist Church in Fremont, MI. He is married to Lois and they have four sons and four daughters. He loves story-telling, singing, feeding and tending the flock entrusted to his care, reading by the fire and playing the guitar or harmonica to his children at night. He is a third-generation pastor and has a sister who is married to a Regular Baptist pastor and two brothers who are Regular Baptist Pastors. His parents serve Jonesville Baptist Church in Michigan.

How Could a Loving God Send People to Hell?