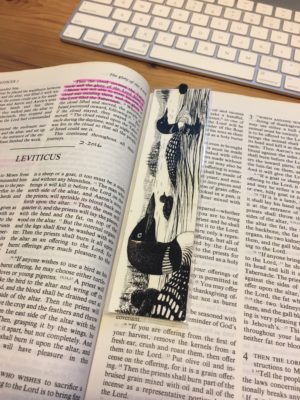 Wherever I go I keep an eye open for bookstores. Downtown Traverse City, Michigan has a unique book shop. The city is at the southern end of Grand Traverse Bay, at the south east base of the Leelanau Peninsula. One day in May a few years ago we were there for a few days on an outing with students. We had climbed the dunes and hiked the trials to enjoy breathtaking vistas of vast Lake Michigan. It was a perfect weekend, sunny and warm. The world was coming to life again with the vigor of spring. The young people had spent the winter mostly confined to a downtown hotel in Flint. Most of them had never laid eyes on the stunning blue vast freshwater sea of Lake Michigan.

We guided them to some of our favorite West Coast of Michigan places. Our group stayed in neat log cabins on the grounds of Lake Ann Camp. We explored Glen Arbor, Glen Haven, the village they call Fishtown, and the vineyards of The Leelanau Peninsula. I drove them to Empire and we hiked out to Empire Bluff, high over Lake Michigan and stood looking down on the Empire Light and the Manitou Islands. They drank it in. They spent a few hours running up and down the dunes.

On the way home we would eat and do a little window-shopping in Traverse City. The students scattered and I went straight to the bookstore for coffee and some relaxed browsing. Wesley was along and he was with me in the bookstore. He came up to me while I was musing among the books and said; “Could I have eleven cents?”

I wanted to ask “What for?” but thought better of it.

“Sure buddy,” I said and handed him some change. He thanked me and skipped away.

Wesley knew that I was fascinated by loons. One evening while speaking at a camp in northern Michigan, the loons would call on what seemed like a schedule just as I would close my evening chapel like vesper chimes ringing every evening at precisely nine pm. I spoke often of loons and pointed them out on the rare occasions we were in sight of them. A few years ago the family spent a week in the Upper Peninsula on a remote lake where we walked out under the stars on every clear evening to watch for the great phenomenon of the Aurora Borealis (the northern lights) and listened to the call of the loons.

When we left the store he handed me a tiny bag and said, “This is for you.” Then he closely watched my face. I opened the bag. In it was a little bookmark with a picture of a loon on it. Wesley knew I loved loons. When he saw it, he wanted to buy it for me. He is a giver. More than anyone else in the family he is determined to give gifts at birthdays and at Christmas and when he sees something he knows someone would like. It is clearly a part of Wesley’s God-given original equipment. The problem is that Wesley has no income.

Sometimes he hires himself out to his mom or dad or brothers or sisters to make money. He collects cans, scrounges in the couch and cars for stray change, borrows, begs or saves pennies. When he was little he would often give a crudely wrapped gift of something that belonged to him and present it ceremoniously on a special occasion. If he can’t work it out any other way sometimes he asks me for money so he can buy me gift.

Has it ever occurred to you that the only way for you to give anything to your generous Father in Heaven is to take the gifts that he has generously given to you and give them back to Him? Even when you work or craft something with your hands and on your own initiative you are really only giving something back to him from what he has given to you. The Apostle Paul understood this. He said; “What do we have that we did not receive?” (1 Cor. 4:7)

Even though the gift Wesley gave me was purchased with money that I gave him, I cherish my loon bookmark and have fond thoughts and warm memories of a little boy with a giving heart handing me his gift and then searching my eyes for approval.

Getting Ready for Christmas