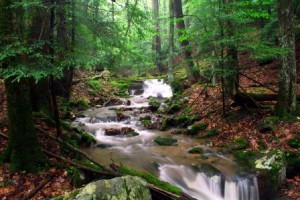 I like the solitude of distance running. When I run I have time to think about things without distraction or interruption. I have time to pray and think and meditate on Scripture. Often I listen to lively worship music on my iPod or birdsongs along the way.

A few years ago we were Kentucky to attend Lois’ grandmother’s funeral. I was training to run a marathon. The day after the funeral, early in the morning, it was foggy and cold in the mountains. I would put in almost fourteen miles on my run that day.

Before I left I gave Kyle money to treat the rest of the family to breakfast and asked him to drive out to the turnaround point with some water in about an hour. I said good-bye to the kids and then ran out of the village into the mountains. I ran on the wide margin of the road up and down grades longer than a mile at some points. At the mid-point in my run, just before the turnaround I began to think about the kids and wondered if they remembered my water.

I was six and a half miles out on my run when I heard a horn beeping in the distance. It was our van full of my children. They had remembered my water. As they approached they were cheering wildly as if I had just broken the tape for first place in the Boston Marathon. The cold water was good but the encouragement was like a shot of adrenalin my veins.

I ran on for another half mile and then turned around to start back toward the village with a new spring in my step. I was alone again. Kyle reminded me that when I turned around I was in for a long grade over a mile and a half long.

On I ran. A few miles later I saw someone running toward me which shocked me because a runner in the rural mountain village of my wife’s childhood was as rare as a grass skirt on an Eskimo. It was Kyle. He had dropped of the rest of the family and then ran out to join me. We would run the last few miles back together. Having him along made the hills a little easier. A mile or two further another runner rounded the bend in the road. It was Chuck. This was love. Chuk is a biker – not particularly a runner. We all ran together back to town.

Out on the road in the heat and the hills it is tempting to walk off and give up the race but I didn’t quit. I finished and I finished strong, a half-marathon distance, not just because of the training or the strength in my legs and lungs, but because I had people to love me and encourage me.

It’s amazing what people can do with a little encouragement and a little cold water along the way.