Last week I hiked and spoke in the Canadian Rockies. It was my job to teach a small group of collegians Biblical truths about the love of God. We drove high into the mountains. We stopped at various beautiful spots along the way. In each place I spoke. One of our teaching places was in Johnson Canyon. There I would teach them, among other things, to notice the gestures of God’s love all around them.

Climbing higher and higher into the mountains one of the young ladies said, “Look at all these daisies. The Lord knows I love them. He put millions of them here for me.” We passed bank after huge bank of daisies waving in the sun.

I said, “Well if God put these daisies here for you, I am going to see a bear soon.”

Not three minutes later the traffic came to a stop. “Why has the traffic stopped,” someone said. I said, “It must be a bear.” And it was. There very close was a curious bear looking right at us almost posing for a picture. He posed, politely crossed the road, turned around, stuck his nose in the air as if to greet us and posed again, then he turned and ambled off into the woods, leaving me in tears. Not only had God allowed me to see a bear, he had given me a powerful illustration of the truth that I was about to teach. 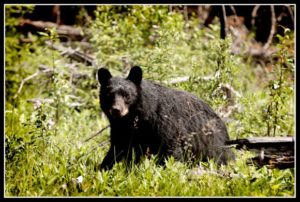 We climbed up into Johnson Canyon and stood in awe at a roaring waterfall – white water charging over huge slabs of rock and thundering down through the canyon. It was awesome to see. Then we climbed to a remote grassy crag in the pungent pine forest. Our spot for teaching was high enough to muffle the roar of the water. There I talked of God’s love and how to hear the voice of God. I told them a number of stories then I told the why the sighting of the bear meant so much to me.

We stood quietly while a chipmunk darted around out group, at one point climbing up on the back of one of the young men. The air was cool. There was a strong scent of pine and spruce and fir in the air.

We had an older man in our group who had served as a missionary. When I finished my teaching, has asked to tell a story. He said he was in Mexico one night with a friend. There was a “shooting star” that shot across the sky. He said, “Did you see that shooting star?”

The friend said, “No, what is a shooting star?”

The sky was dark. My friend put his arm around his friend and gazing up into the night sky said, “Dear Lord, my friend here has never seen bow lights. Would you just light up the sky for him?”

Almost immediately the sky was alive with a long display of lights shooting across the sky.

When we are alive to the millions of gestures of God’s love all around us, all of life becomes an adventure.