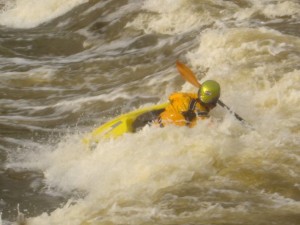 Sheldon and Jean VanAuken – Jean’s maiden name was Davis so he called her Davy and friends called him Van – had a dream as newlyweds. They wanted to sail together throughout the world. They bought a sail boat with inheritance money and named it Grey Goose. They named their sailboat after a bird that mates for life and will usually not mate again after the death of their partner. Their marriage ended when Davy died in her thirties. Van never remarried. Their marriage was short, but it was an adventure worth reading and re-reading recorded in Van’s book, A Severe Mercy.

Dan and Bethany are newly married. They read A Severe Mercy. It may have been one of the things that inspired them to spend the first six months of their marriage in a unique way. They are going travel the length of the east coast of the United States – in kayaks. They started in Maine in September and they are planning to spend Christmas in the Florida Keys.

Most of us are not in a position to quit everything for six months and go on a travelling adventure. Most of us would lose our jobs and our homes. We have children to feed and raise and train. But I still think that Dan and Bethany are onto something.

Marriage should be an adventure and married couples should embark on a life-long journey of discovery and wonder. They should meet new people, and determine to make a better mark on the world together than either of them could alone. They should learn to graciously receive help from others and help others along the way. They should always be open to new discoveries and they should learn to shoulder hardships together. Married couples she commit to common goals and let nothing stop them from achieving them. Goals like finishing hand-in-hand and raising emotionally healthy, spiritually vital children together. They should join their individual lives and gifts to make an impact for the Kingdom of God. They should be thinking in terms of generations of influence for God.

Maybe you don’t sail, kayak, or have a lot of extra money to fund exotic trips, but with a little effort, creativity, and conviction you can live an adventure together.

Dan and Bethany are posting journal entries on their web site as they make their way along the coast. Let’s have some fun and see how many people we can get to follow them. Will you do me a personal favor? Will you post a comment on their site for me and let them know you a Stonebridge subscriber?
As we follow their progress let’s let them inspire all of us to live an adventure together. You can follow their adventure here.

What Does It Take To Make You Happy?