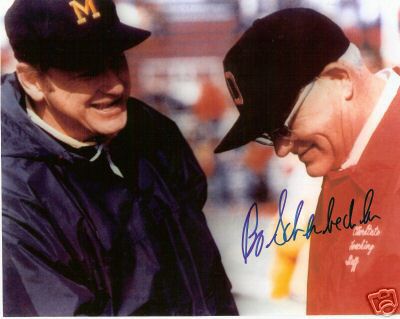 Sometimes people are out to get you, but probably not as often as you think. The sad fact is most people really do spend most of their time thinking only of themselves. They are not guilty of malice toward you as often as they are guilty of indifference. In my thirty years of ministry I have noticed that part of the Devil’s craft is inspiring people to do just the wrong thing at just the right time to confirm the worst suspicions of the best people. Not everyone is out to get you even when it seems so, but there are dark forces at work to make you think they are. Which reminds me of how many really bad stories begin with the line: “I was in a hurry.”

In a big hurry I almost ran over a man today. I had places to go and things to do. I was jamming all my auto-maintenance tasks into an hour of time before leaving for the day. Most of you who know me are aware that my people were from Ohio. Somewhere in my genetic coding is a Buckeye gene. I love a crisp Michigan autumn Saturday, but I’m usually following the exploits of Ohio State’s Buckeyes. The man I almost ran over was smartly dressed in the bright maze and the striking blue of the University of Michigan, but honest, I didn’t notice that until after I almost flattened him with my Jeep.

I love Michigan. I love Buckeye football. I also love my old worn-out Birkenstock Arizonas. The hurry and the Arizonas are what got me in trouble. I like to wear my Birkenstocks far into the fall of the year. I just add a pair of wool socks and I’m good â€˜til the snow flies. That little arrangement interfered with my normally lightening-fast reflexes. I jumped into my Jeep, pulled it into reverse and zipped backward. Out of the corner of my eye I saw a dark object moving behind me and to the right – in the direct path of the Jeep.

When I tried to apply the brake, the edge of my sandal caught on the back of the brake peddle. The car lunged back toward the dark object who, honest, just-happened to be a young man wearing a University of Michigan hat and a striking University of Michigan jacket emblazoned with the bold, block “M.” Owing to his athletic prowess, he jumped out of the way just in time. From the safety of the curb he looked back to see the man who was trying to kill him. I found the brake and came to a clumsy, lurching stop.

Meekly I rolled down my window and profusely apologized for nearly killing the poor man. I tried to explain what happened. He just stood at a safe distance and watched me as if in speechless shock.

People often assume people are trying to hurt them when usually people are just preoccupied with their own hurries and their own worries and they are not being careful or kind. If the young man knew I was a rabid Buckeye fan, he might have assumed that I was tying to make a hood ornament out of him. He might have wrongfully concluded that I was using my bright red (read scarlet) Jeep as an instrument of hostility.

Next time someone attacks you, get all the facts before you draw conclusions. The Old Deceiver gains a lot of ground stirring up trouble by playing on our fears and prejudice. If someone tries to run over you with his car he’s probably not homicidal – he’s probably just in a hurry.

Are You Under The Mercy?

Where Have You Been All My Life?

Three Parts of a Powerful Blessing