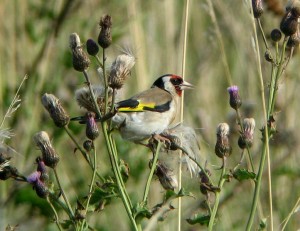 Before they invented video games parents had to be more creative. On a summer afternoon when I needed something to keep myself occupied, I didn’t have a room full of electronic gizmos. Back then I could never have conceived of the Internet, Facebook, iPods, VCRs DVDs or cable TV. For a long time we didn’t have a TV and when we did it was a small black and white set. My grandfather would sometimes give me a “weed whip” and tell me to walk along the road and cut down what he called Canadian Thistles. That was not only before video games, it was before they invented gas-powered weed-eaters. The tool was similar to a golf club and it was not gas or electric powered. It was boy-powered.

Chopping down Canada Thistles was only temporarily effective because if you didn’t pull them out by the roots and runners they would grow again, but Grandpa wanted to cut them down before they blossom into purple flower and then go to seed. The seeds would blow around the farm and the pest would multiply. He also knew it was a good idea to do something to channel my boundless energy into something at least mildly productive. You can’t let weeds like that take over the farm or restless boys wander around without productive things to do or you are asking for trouble – but that is another story – actually a series of harrowing tales we will tell another day.

If you do a little research you will see that Canada Thistles are a terrible scourge to North American grain farmers. They grow fast and tall, quickly reaching over five feet in height. The United States and Canadian governments have spent millions of dollars without success to try to find a way to eradicate this aggressive weed. Butterflies and birds love it, but it is very costly to farmers so they have good reason to hate it.

This is Thanksgiving Eve. I’m thinking about thistles and thankfulness. Thanksgiving is an important holiday. It’s an even more important quality. Its opposite is an ungrateful spirit or a complaining habit and that sends down roots into your soul and takes over your life like an ugly noxious weed. Complaining is an aggressive, ugly habit that quickly spreads and affects everyone and everything around you. Steadily it will overcome your whole life, choke out other good things, and dominate your home, your church, and your place of study or work. Complaining us unproductive and, like a thistle, it is a prickly weed that discourages people from getting close to you.

Unlike the thistle, ingratitude can be displaced from your life by growing habits of praise and thanksgiving. The ugly root of ingratitude cannot survive where praise is present. Thanksgiving drives it immediately out. List some things to be thankful for and get to work quick before ugly things take over your life.

Are You With Me?

A Flyover of Matthew