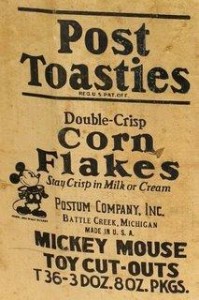 My Grandfather Pierpont grew up near Chatham, Ohio in the days when cars were a novelty of the rich. For staples and supplies that the family couldn’t grow on the farm they would take a buggy to the village store. He often told the story about what happened on one of those trips to town. It was winter. The river was frozen and the ground was covered with snow. The trip to Chatham would be an adventure that winter day. They would use the sleigh. The whole family clamored to go.

After all the necessary items were bought, sometimes there was money for something special. What the boys longed for most was a treat originally called Elijah’s Manna in 1904. Clergymen objected (those obstreperous clergymen). C. W. Post countered, defending his use of the name, but the controversy didn’t die until the cereal was banned in England and eventually re-issued under its new name: Post Toasties. The company discontinued the cereal in 2006. Why would anyone eat Post Toasties anyway when they could begin their day with a glorious bowl of Cinnamon Toast Crunch? But in the years of my grandfather’s boyhood cars were rare and Cinnamon Toast Crunch would not come along until years after his death.

My grandfather was born in 1908. Ohio’s first radio station was in 1922. If that signal reached Chatham, the Pierpont boys could not have listened. He had moved into town before rural electrification reached northern Licking County. Grandpa would live through two world wars, serving in one, the Korean and Vietnam conflicts, and the Great Depression. A little over a decade before his death one summer night in June Americans had strolled on the surface of the moon. But the invention that captured the interest of the oldest Pierpont boys during those days was made in Battle Creek, Michigan and sold in boxes at the store in Chatham, corn flakes called Post Toasties.

The store and the Methodist Church in Chatham would be significant in the social life of the Pierpont brothers. In the late 1980’s, when I was pastoring a village church in Brandon, I met a man named Russell Litt, who was a childhood friend of my grandfather. He said, “I always remembered your grandfather and his brothers playing checkers on the porch of the general store in Chatham. (I never remember my grandfather losing a game of checkers).

On a normal day the trip to the store followed the river for a about a mile and then crossed at the bridge. On this day the river was frozen-over so on the way home they took the short route over the ice. It was a serious mistake. Crossing the water the ice caved in. My great grandmother was thrown from the sleigh. She was holding my grandfather’s youngest brother, baby Orville. She lost her grip on the baby and he was plunged into the ice water.

My Grandpa was about ten at the time. His brother Elmer was twelve. They were able to make their way to safety on the bank. The parents stayed in the ice-clotted river trying desperately to save baby Orville. He was in the water along with all the contents of the sleigh.

What happened next would live in Grandpa’s memory for the rest of his life. Orville was rescued alive from the water. He recovered from the incident and went on to live to old age and died in 1989.

When I was called to pastor the Brandon church one of the ladies told me that Orville’s wife Audrey was well-known for a good groundhog recipe. As a young man Orville slipped and fell, injuring his back. The injury probably contributed to his noticeably hunched back. His handicap did not keep him from being active and productive. Around nearby Utica, Ohio for years if you needed a man to fix a car no one else could fix you took it to Orville Pierpont. He could usually dope it out. He had a neat place at the crest of a hill west of town. Behind the house he had built a small trout pond. When I visited as a boy he would take me out back and throw rabbit food in and trout would churn the water. Nonetheless Orville lived to marry, raise a family, and earn an honest living doing something helpful. All that and a wife who knew how to fix ground hog. Despite the trauma, he lived a good life.

The part of the story my Grandpa loved to tell was what happened there on the bank of the river while Orville was bobbing in the icy water. His brother Elmer’s concern was that the new groceries were thrown into the water and they were being carried downstream. Elmer, seeing the gravity of the situation began to call out instructions from the bank. Grandpa remembered his exact words sixty years later. He was shouting at the top of his lungs to anyone who would listen; “Hey, Save the Post Toasties. Somebody, save the Post Toasties.” I asked Grandpa if anyone did. He said he didn’t remember that.

Orville’s icy plunge happened over eighty years ago. Elmer died before I was born and this little incident is about all I know of him. I’m sure he lived to regret his misplaced priorities. Buggies and sleighs have been replaced by automobiles and hundreds of other brands of cereal have captured the enthusiasm of children now but scrambled values are still a common problem. It would be funny if it weren’t so tragic. Since Elmer was only twelve at the time we can forgive him for being more concerned about his Post Toasties than his baby brother, but once we’re old enough to know better, we should no longer value things over people, profit over principle, and time over eternity. We shouldn’t waste our time worrying about things that don’t matter or working overtime for things we will sell for small change at a garage sale or haul off to the second-hand store in a year or two.