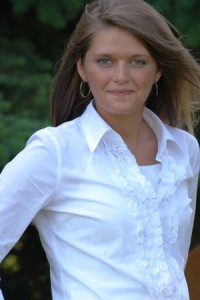 When Hannah was just a little girl I started calling her Rudy – it is a short version of her middle name Ruth. Rudy is the term of endearment I prefer to use for her even though she has now grown to a tall, beautiful young lady with poise inappropriate for a nickname you might expect to use with a ten-year-old red-headed, freckle-faced boy with a missing tooth.

Rudy has two older brothers and two older sisters, so she has always been afraid of being left out of the fun stuff the older kids got to do. Her sisters spent hours and hours and miles and miles on their in-line skates “blading” around the neighborhood. She forced her little legs to keep up with them every mile.

When she was small she required little discipline. She is our fifth child. She had a little willful streak but nothing too serious. She would throw a leg over the side of her cradle when she wanted out. Her mother would put in back in. She would flop it out. Mom would swat her and put it back. Out it would come again. No matter how many times her mother swatted her, that little leg would come back out. But for the most part she kept out of trouble. I suppose she just watched the others and kept herself out of trouble as much as possible.

One afternoon her two older brothers and her two older sisters were feuding or mis-behaving and they needed discipline. I put it off until it had reached a crisis point and finally I said, “That’s it. I want all of you in here now. You are all getting a spanking.”

I lined them up and one at a time I had them bent over the ottoman one at a time and I gave each of them a swat. Each one, after their spanking walked way crying.

Hannah was so small at the time she was wearing a diaper so she must not have been twelve yet – just kidding – she was under two years old. When she saw her older siblings lining up and getting spanked and going away crying she just waddled over and got in line. In turn she walked up and bent over the ottoman for her turn.

The children and Lois all stopped and watched what would happen next. I smiled and have her a harmless swat on the diaper. She burst into little fake tears and went away wiping her eyes.

That’s Rudy. She has always hated the idea of getting left out.

The book of Hebrews quotes this proverb: My son, do not despise the chastening of the LORD, Nor detest His correction; For whom the LORD loves He corrects, Just as a father the son in whom he delights. (Proverbs 3:11-12 ESV)

Proverbs is written especially to young men, but this is true of girls too. This may seem odd, but you want and you need the full experience of a parent’s love, not just gifts and provisions, but you need their direction, their warnings, even rebukes and correction. The scriptures say not to despise or detest that correction, because it is evidence that you are loved.

Rudy seemed to understand that from a very young age.

Stick With the Main Thing and Stick Together (Sermon) Video

Six Ways To Influence the Next Generation