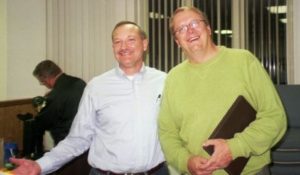 In every city, and villiage, and berg, and suburb, and township, and county in America the Church of the Lord Jesus Christ rests on the backs of men like Pastor Terry Gibson, men who are called and empowered by God and commissioned for the task of the pastorate. We are spending the week at the church he pastors, First Baptist Church in Portage, Indiana. The men are actually camping out for week in a park-like setting under the stately Maples and Oaks on the chruch property. (I just happen to be using his wireless connection right now) If you get a chance, read his thoughtful blog. You will enjoy it. Hey, I have to go. He made coffee and I can smell it. TTYL.