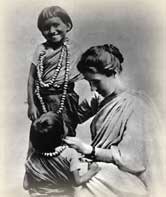 This afternoon it rained. It was a sweet, refreshing, gentle rain. I stole the luxury of an hour with a book I first read when not yet thirty years old. I read the book mostly lying on the couch before the fire in the parsonage in Knox county, Ohio. Without noticing it my once-and-not-long-ago-new book, was yellowed with age, and worn with use. It surprised me to realize that the book had grown old in my care. I thumbed through it and noticed my annotations and highlights faded with age. I noticed the pages marked by my daughter when she read it. I re-read a chapter. How could I have known that path that I would follow in the last twenty years?

Today I reach into this treasured book and draw out a treasure to share with each of you—a truth sweet to tell about how to sustain service when circumstances are difficult.

The chapter I read was about how God gave the vision and the inspiration for a prayer chapel in the center of the grounds of the Dohnavur Fellowship in south India. The House of Prayer has a prayer tower. There children were taught to worship the One true God with reverence and rejoicing. So they would never be bored with the hymns-singing, they were taught to sing and play tambourines and wave colored flags.

The Prayer House had two spires. The larger one was too illustrate worship and the smaller—service. The spires were to illustrate the two aspects of holiness, Godward and manward.

“The House was finished, a beautiful building standing in the middle of the compound, covered with flowering vines. The architect who designed it took its style from an old palace in Travancor, a city where the influence of the Chinese carpenters had been felt from ancient times. There was hesitation about one feature of its architecture, lest it be a mere luxury, an unjustifiable spending of money sacrificially given, but a specially marked gift came for that very thing—a prayer tower. On its roof are two pointed shafts, a symbol of the unity of spiritual and secular in the life of holiness—the men and women of Dohnavur lived a common life, but they lived it with God for others. In the tower are tubular bells, “things we should never have thought of buying.” Morning and evening a hymn is played on the bells, and each hour they ring for a moment of stillness for prayer and recollection.” –from A Chance to Die.

Her sincere, sustained service grew out of worship, admiration for Jesus. And so it is with each of us. Those who have their roots down deep into the black, rich, soil of worship will not wither and waste in under the beating sun of time, the winds of hardship, or the storms of opposition. Burnout begins when worship ends.

Real Faith: When Everything is Gone (Sermon) Video