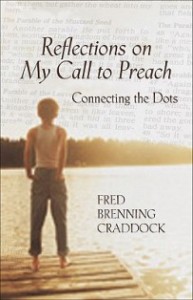 I had lunch with a young man this week who has visited Evangel at least twice. He said that it is not the kind of church he would usually visit, but so many of the people that he knows who attend here are so nice that he had to come and see what it was like. He has returned with his family. I hope one day they will be a part of the family here. Simple Christian faithfulness, kindness, sincerity, integrity are powerful things. They draw others to investigate the things of God.

Fred’s Father thought his mother’s involvement in church was a waste of time. His father usually said nothing about the families church-going, but when he did speak about it he spoke critically of the pastor and the people. This went on for years. Then, at sixty-three he was in the hospital. He was dying of cancer in his throat. He had been treated with radiation and surgery. He was weak and unable to speak. He was in great pain. On a table by his bed was a stack of get-well cards. Every one of them was from someone from his wife’s church, the church he often criticized, whose pastors he belittled in their efforts to claim reclaim him.

He saw his son looking through the cards and unable to speak scribbled on the side of a tissue box the words, “I was wrong.”

One day, when you are dying, you will want to have a church family around you. Others are dying—they are perishing, and they need a team of sincere, godly people around them. And not just for dying, but for living, too.

Go to church Sunday. It’s the only way to live. Wise people discover that before they die.

Lord, I’ll Serve You Even Though I Can’t See You (Sermon) Video