[This story is based on date Lois and I had two nights before Christmas in 2009. She took a beautiful photo diary of the evening you can see here].

Sunday night Lois and I were given a valuable Christmas gift. We enjoyed it last night. It was a set of passes to Greenfield Village for Holiday Nights. There’s nothing I have ever seen quite like it. 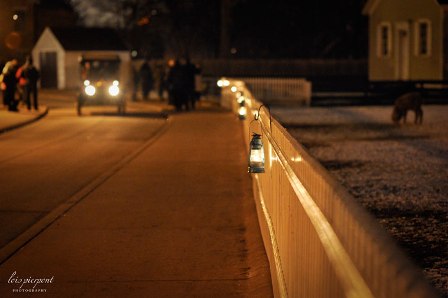 There were lights all over the village, and glowing kerosene lantern lights along every walkway. Skaters laughed their way around an old-fashioned ice-skating rink under hanging lights. There were smells of cooking things in the cold air. There were fires here and there ringed with happy people pushing back the cold. There were carolers in costume, various editions of Model T Fords chugging faithfully around, a saxhorn ensemble on the street, and a colorful carousel. There was a wagon drawn by four beautiful white horses with a troubadour on board singing and strumming and entertaining the passengers. On the roof of the house where Robert Frost once lived was a jovial Santa holding court—somehow knowing the very names and hometowns of children in the crowd.

At the end of the village green is a colonial chapel with a white spire towering up into the dark winter sky over the whole village. On the green was a covering of snow. People, wrapped in the warm clothing bustled here and there. There was a covered bridge, ponds, woods, craft shops, barns, sheds, and Victorian homes. Many were in a festive mood.

Here and there were courting couples—couples in love. Christmas is a beautiful time of year to be in love and the Village is a for it. My lover was taking pictures of the whole affair and I was using the cold as an excuse to coax a warm kiss out of her from time to time. She is a photographer. She notices things other people don’t see. She watches people. About then she noticed something sad.

There on the margin of the Village Green, just outside of the circle of light cast by a roaring fire, just out of range of the sound of a storyteller… was a couple. They were not having a good evening. They were in deep, embarrassing, angry, public, conflict. It was three nights before Christmas. It was a perfect evening. They had spent a significant amount of money to enjoy a one-in-a-lifetime Christmas experience. They were standing at the base of a huge spruce which was glowing with hundreds and hundreds of beautiful lights. A few yards a way a man took turns playing fiddle tunes and a penny whistle and telling the stories behind the songs of Christmas. There was beauty and wonder everywhere. There were Christmas carols hanging in the air all around, but this couple was dead to all of it. They were arguing angrily—trading violent verbal blows like desperate boxers coming down to the final round—just battering each other verbally. They were so engaged in it that they seemed unaware of anything around them.

We walked away. I tried the suppress the painful thought of it. I have noticed that often people look unhappy at Christmastime. Even in places of celebration or recreation—people are often working so hard to have fun or to celebrate that they look troubled. They look burdened. They look busy. They often look sad, but they rarely look joyful. Even a few days before Christmas people’s faces are often chiseled with grim determination or blank with quiet resignation.

At Greenfield Village on Holiday Nights the evening closes with a stroll across the Village Green following carolers in period costumes who are carrying lanterns. Then everyone gathers in a crowd around the Town Hall for caroling and an impressive display of fireworks.

Lois took her last few pictures and we walked toward the car looking forward to some warmth and food, but the last thing we saw before we exited the quaint village was the quarrelling couple. An hour later they were still trading verbal blows. Still their faces were snarled in anger and hurt. Beneath them, looking up wordlessly with wide eyes, were their two small children… recording an unforgettable Christmas memory.

I walked away with my heart aching to introduce people to Christ. We all need Him in our homes. He is the hope of Christmas. He is the light of the world. He is the Prince of Peace. (Isaiah 9:6)

Our dear friend Jeff gave us the wonderful gift of a night at Holiday Lights at Greenfield Village in Dearborn. It was a memorable evening together. Ken wrote about it here. We had gone once before, so we knew it was going to be a great place for pictures.

Santa shouted greetings from the roof of the Robert Frost house.

All over the village Christ was proclaimed in song. Every song we heard was a Christian Christmas song, not a “holiday” song.

In 2007 the Widners treated our whole family to Holiday Nights so we were delighted when we ran into them. We also happened to meet some of Evangel’s finest young people out for an evening. Jonathan Swift from Evangel was roasting chestnuts in the Village and the next night, in front of the chapel on the green, his brother Andrew presented a young lady with a beautiful engagement ring. (She said yes).

Do You Have a Quiet Place?