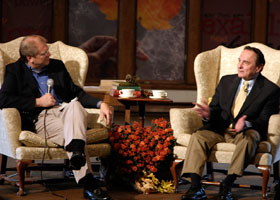 I had an interesting conversation with Bill Gothard one fall evening. We were walking in front of the Northwoods Conference Center in the western Upper Peninsula of Michigan. It was a brisk fall evening in the after-glow of the sunset over Wolfe Lake. The fragrance of burning wood hung in the air.

During a twenty-year period of popularity, Bill’s Basic Youth Conflicts Seminar had over two million paying registrants. He didn’t take a large personal salary, but invested the proceeds from the ministry in real properties like the Conference Center in the Northwoods and the Headquarters campus which straddles the line between Oak Brook and Hinsdale, Illinois. He lives in the home his parents left to he and his siblings. His personal car is a restored 1971 Oldsmobile. He has not enriched himself personally with the proceeds of the ministry.

The ministry also has two major properties in Indianapolis, Indiana and a campus in Big Sandy, Texas. The Northwoods Conference Center is a three-thousand acre property with a three-hundred acre lake. The roads are graded back and paved like a national park. It is an impressive place. On it is a beautiful conference center with a hundred guest rooms. Bill has a personal cabin there—though he hasn’t used it personally in years. It is a secluded one-bedroom cabin with a fireplace and another room in the loft. There are two homes owned by the ministry built on Wolfe Lake. They are often used for week-long revival meetings for young people called Journeys to the Heart.

At Headquarters in Oak Brook is a small room with file cabinets full of testimonies of people who have been helped by Bill’s teaching and ministry efforts. I have personally known many who have been helped—especially during those twenty years when the hand of the Lord was on seminar ministry in a unique way.

Bill works for hours every day, but he is most likely to be relaxed when he is in the Northwoods. I would ask him questions about how he came to develop the Basic Seminar and major Christian leaders he has known through the years. Those were fascinating conversations. While we were talking that fall evening between sessions of a conference I said to him, “It must be a wonderful feeling to realize that you have been used of God to help so many people, and develop places like this?”

He stopped walking, turned to me, and looked me in the eyes. “No, Ken. That’s not how I see it. When I look at this property I don’t think about the past, I think about the future. I see thousands of young people coming up here to meet with God. Our see our greatest days still ahead.”

I felt a mild rebuke. Bill is not against telling stories of God’s work in the past. He often does that, but he wanted to make it clear to me that he was not planning on coasting or jogging from third to home. His plan is to sprint to the end and strain for the tape.