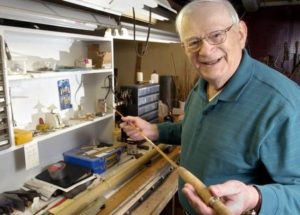 Chuk found this video of our friend Wes Cooper. He taught us fly-fishing. He gave the boys their first fly-tying vice. I added this video and link to the story I wrote about Wes back in 2004. We would often saunter in on Sunday nights and listen to me preach. He is a devoted Christian man.

A few years ago we considered taking up fly-fishing. When we wanted to learn fly-fishing we read about it. The literature on fly-fishing is extensive. The best fly-fishermen must spend most of the winter tying their own flies or writing first-class prose about the sport. It is an art-form and the aesthetic bent that draws a man to it must lend itself in many fly-fisherman to good descriptive writing. It is common for a good book on fly-fishing to be illustrated with some very satisfying watercolors.

Henry VanDyke was such a man. I still cherish the memory of reading my first essay by Henry VanDyke. VanDyke is perhaps best remembered for writing the words to “Joyful, Joyful, we Adore Thee,” but he was a man of an amazing variety of gifts and interests. The pastor of Brick Presbyterian Church in New York, an American Ambassador, and avid lover and explorer of God’s creation, he was a writer and fly-fisherman. When he writes of a trout stream in the heather-carpeted highlands of Scotland you can almost hear the brook, smell the moist air, and feel the tug at your line.

It was a sweet smiling providence that directed me to a used bookstore one afternoon on the way home from a speaking engagement where I found a treasure I didn’t even know at the time existed – the complete works of Henry Van Dyke. Eighteen beautiful hard-cover volumes nearly a century old. The set is a world of pleasure, theology, essay, memoir, exposition of Scripture, and outdoor journals from travels around the world. Van Dyke even wrote a full book on his observations of creation in the Land where Christ walked.

There is just plain a wealth of good fly-fishing literature available for long winter evenings when you are waiting for spring. It is great to read and beautiful to behold. But you can’t really learn to fish by reading about it, not even books with pictures. We wanted to learn the sport. I knew we needed a mentor. In my pastoral visitation I began to ask around.

One afternoon calling on a man in our church I judged by a room full of trophies that I was in the home of a seasoned outdoorsman. I said, “Say, what do you know about fly-fishing?”

“Well, not much, but I tell you who does. Wes Cooper is a master fly-fisherman. He builds bamboo fly-rods and people from all over the country buy them.”

When I returned home I told my sons, “Here is the phone number of an expert fly-fisherman. Most older men will open the treasure of their knowledge to a young man who will respectfully listen and ask insightful questions. When he sees you are eager to learn, he will teach you everything he knows.”

That was true of Wes Cooper. He was a retired school teacher, a devoted follower of Jesus Christ, a fisher of souls, and a fly-fisherman. He invited us over and he showed us how to cast and we stood around for a couple hours copying notes into our little notebooks as we learned the art of fly-fishing. He saw that we had an appreciation for what we could learn from him. A few weeks later he took the boys with him out on some of his favorite streams in West Michigan and showed them on the stream how to match the insect hatch, how to present the fly, and how to hook and land a fish.

If you want to be a fisher of men, follow Jesus, go with him, imitate him, admire him, and fellowship with him – that is how we will learn to influence men into the Kingdom. That is how we will become fishers of men.

I was talking with a Canadian pastor in the lobby of the Character Inn one day. I could tell he walked with God and had a great love for God. I asked him where he got his formal education. He said, “I didn’t go to seminary. I studied under Bill McCleod. I just spent time with him and he taught me how to pray and walk with God and live in the word of God.”

I remembered the name Bill McCleod. I had read of him and listened to a recording of his own account of how the Spirit had visited his church and his entire city with revival. The revival spread through a large part of Canada and the States. He had walked with God. He had tasted revival. He had seen the hand of God at work. The young pastor made a wise decision to study under Bill McCleod. He knew that to learn you must spend time with one who is a follower of the Master.

Years later an interesting thing happened. We moved from the area to serve at the Character Inn in Flint. Lois’ brother, Alvin, was in the area in a fly-fishing shop during a trip to West Michigan and an elderly man struck up a conversation with him. The white-haired man showed interest in him even though he is an unlikely looking outdoorsman. He rides a Harley, wears a leather jacket, and has tattoos, a goatee, and long hair in a braid. We don’t think he knows the Lord yet. Our children have prayed for him every night for years. The old man in the fly-fishing shop was our friend Wes Cooper. It was Wes Cooper who struck up a conversation with him and tried to influence him into the Kingdom. He was following Christ. He was fishing for men.

When my hair is white I want to be the kind of man who stands around fly-fishing shops and strikes up conversations with unlikely types to tell them of the Master who captured my own heart so long ago.