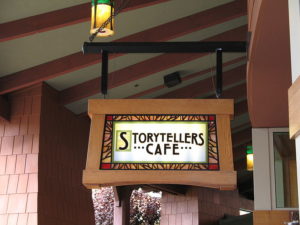 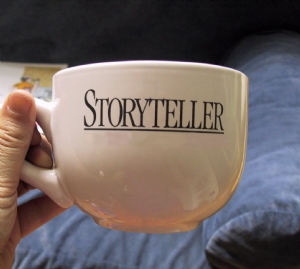 If any of you ever happen to run across any storyteller signs, cups, or license plates, let me know. I love to tell stories, collect stories, hear stories, and write stories. Seventy percent of the Bible is in some form of story. The gospel that changes lives is a story. One of the most powerful ways to motivate, convict, convince, and influence people is through stories. The enemy uses them every day. People of God should too.

Have you ever noticed that grandpas are almost always story-tellers? And they usually repeat the same stories over and over again. Every grandpa I know does this. Was your Grandfather like this? Mine was.

Sometimes we would arrive long after dark. After eating a bowl of cereal we would go up to bed in the big bedroom directly over the living room. We would try to go to sleep. The old house had no heating ducts running to the upstairs bedrooms. Heat radiated up the stairs and through a register cut in the floor of the bedroom. One night lying in bed I heard happy voices from the room below and I could see light. I got out of bed and looked down through the register. The register was directly over my grandfather’s choir. I felt the smile of heaven.

I lay there on my belly and night and watched and listened. I loved the musical sound of happy voices drifting up from below. All the adults would stay up for hours later than usual catching up on news and talking about old times.

Grandpa was a gifted story-teller. He had a way of painting pictures with words. He told of childhood memories, some of them sad and some of them silly. He told war stories of his time in the South Pacific during World War II. He told stories of his experiences as a diver, a boxer, baseball player. He told of what it was like to live through the Great Depression. He told of his experiences as a country pastor, and he told stories from Fiberglass in Newark where he worked for 37 years. He told stories about things that happened on the farm and colorful interesting tales about characters he knew from the community.

Sometimes in the summer we all attended a church conference in southern Ohio together. All the men would sleep in a simple old building built long and low like a barracks. They called the meeting Christian Union Council. At night we would lie still in our cots while one of the old preachers would play his harmonica. He was a meek old bachelor from southern Ohio named Sooter Hoople.

After the last strain of the harmonica music faded to the sound of crickets the men would tell stories. I lay in bed listening, never saying anything, feeling secure and happy, and enjoying the company of these simple Christian people. Grandpa’s stories were always favorites. I could tell that Grandpa was a man people loved and admired like I did.

Maybe it was looking down through the heater grate in the old farmhouse that I first began to feel the power of stories. Maybe it was lying in my cot on the old conference grounds in Greenfield, Ohio. Maybe it was sitting in the pew in the tiny church in Linnville when I would be aroused from my daydream in the middle of a message by the insertion of a personal story. Maybe it was in the after-school Bible clubs that my mother taught or listening to Aunt Bea on Children’s Bible Hour, or listening to Dad’s preaching. (Isn’t it always the stores that we remember most about preaching?).

When my Grandpa told stories it seemed as natural as sunshine. I didn’t realize at the time that what he was doing is actually commanded repeatedly in the Scripture. Here are a few examples.

• Only take heed to yourself, and diligently keep yourself, lest you forget the things your eyes have seen, and lest they depart from your heart all the days of your life. And teach them to your children and your grandchildren, (Deuteronomy 4:9)
• Tell your children about it, Let your children tell their children, And their children another generation. (Joel 1:3)
• One generation shall praise Your works to another, And shall declare Your mighty acts. (Psalm 145:4)
• Now also when I am old and gray headed, O God, do not forsake me, Until I declare Your strength to this generation, Your power to everyone who is to come. (Psalm 71:18)

God knows we need to remember those stories so he commanded us to repeat them.

What a delightful duty, to take a little one on your lap and tell them a story. What a pleasant responsibility to sit in a tree-stand with your grandson and tell him stories of the working of God through the years. What an easy yoke, to canoe with your daughter across a misty lake in the early morning and with the call of a loon in the background tell her stories of God’s kindness and love in your life. How kind and creative for the Heavenly Father to command earthly fathers to tell stories to their children.

Such a command sounds too good to be true so let me show you proof. Matthew 13:34 records that there was a point in his ministry that Jesus never taught without telling stories. “Without a parable he did not speak to them, that it might be fulfilled which was spoken by the prophet, saying: “I will open My mouth in parables; I will utter things kept secret from the foundation of the world.” This is a quote from a Psalm. A careful study of that Psalm will reveal that there are some powerful promises implied in it attached to stories. Among other things stories can help protect our children from defection from the faith when things get tough. Within the Psalm is a delightful truth that can protect the children we love from the epidemic of rebellion that is sweeping our land.

That is the promise implied in verses 7-11.

“That they might set their hope in God, and not forget the works of God, but keep his commandments:
And might not be as their fathers, a stubborn and rebellious generation; a generation that set not their heart aright, and whose spirit was not stedfast with God. The children of Ephraim, being armed, and carrying bows, turned back in the day of battle.
They kept not the covenant of God, and refused to walk in his law; And forgat his works, and his wonders that he had shewed them.”

Our children do not generally lack exposure to the salient points of the gospel. They are not unfamiliar with the accounts of scripture or the claims of Christ. But many stray from Christian homes into the way of unrighteousness as if they have no concern that they will stand before God in judgment one day. They seem to have no fear of God. They seem to “forget the works of God,” and disregard his commands.

It would be legitimate to title this Psalm “A Dad’s Delightful Duty.” A careful consideration of the Psalm reveals four clear examples of the kinds of stories Dads can tell that will keep their children’s hearts tender to God and bold for Him. The Psalm is Psalm 78.

Why Are Stories So Important?

Give ear, O my people, [to] my law: incline your ears to the words of my mouth. I will open my mouth in a parable: I will utter dark sayings of old: Which we have heard and known, and our fathers have told us. We will not hide [them] from their children, shewing to the generation to come the praises of the LORD, and his strength, and his wonderful works that he hath done. For he established a testimony in Jacob, and appointed a law in Israel, which he commanded our fathers, that they should make them known to their children: That the generation to come might know [them, even] the children [which] should be born; [who] should arise and declare [them] to their children: That they might set their hope in God, and not forget the works of God, but keep his commandments: And might not be as their fathers, a stubborn and rebellious generation; a generation [that] set not their heart aright, and whose spirit was not stedfast with God. The children of Ephraim, [being] armed, [and] carrying bows, turned back in the day of battle. They kept not the covenant of God, and refused to walk in his law; And forgat his works, and his wonders that he had shewed them. (Psalms 78:1-11 KJV)

Are Children Welcome in Your Home?