The children have been buzzing with eager excitement all day. It’s an early summer evening. We’re on the way to see the Columbus Clippers play baseball. We stop at Meijer to get a two-liter for the kids to wash down a meal from the Dollar Menu so we would have the will-power to resist the expensive hot-dogs and five-dollar ball-park Cokes.

We park the van as close as we can to the stadium. You can see it in the distance. Daniel is about three. “Daniel, take my hand, son.” We stride through the crowded parking lot between cars toward the ball park.

You can smell the grilled onions and hear the vendors barking and the crescendo of the organ.

I don’t really care much about the Clippers or baseball. I just want to make a memory with the family and I am in a hurry to do it. I like sports, but it’s not an addiction. I love the game of baseball, but it’s not an obsession. I don’t get tickets often and I want to be there on time. I just know this is an evening that we will remember for a long time—if we can just get to our seats.

“Here, Dan, hold on to my hand. Let’s walk a little faster.”

“Don’t worry about it son. We’re not going to play, we’re just going to watch.”

We go back for the glove.

A roar goes up from within.

“Do you think somebody else will get the good seats?”

“Not if we hurry. Can you walk just a little faster?”

“Maybe, if we get in there before the game’s over.”

“Do they have bathrooms in there?”

“Sure. Do you see that long line of men over there? They’re waiting to use the bathroom. Do you need…”

Suddenly a loud crack sounds behind me. Simultaneously a lurch against my hand. Then a sickening silence. A child getting ready to wail in pain. Then the wailing begins and Danny his holding his face and jogging up and down in pain. I have pulled my little boy with a red ball cap and a shock of sun-bleached hair jutting out into the side-view mirror of a parked car. The impact is so hard. It loosens the mirror. I pull his hands away from his face. No blood, but a bright read crescent under his eye on his right cheek.

He smiles up at me through tears and says, “We better hurry, Dad. We don’t want to miss the game.”

Sometimes I get in such a hurry that the memory I make is not the one I hoped for. Danny starts college this fall.

“Danny, have you ever had peanuts at the ball park? They tatste better there than anywhere else in the world. You’re never gonna’ forget this.” 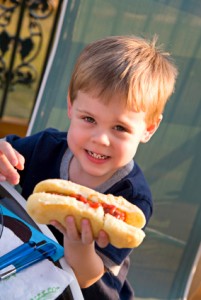