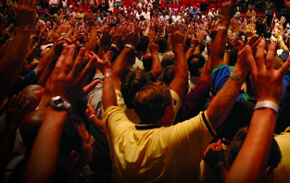 In May of this year we invited Tom Harmon to speak to the men of our church on a Saturday morning. We started early and served the men coffee and a light breakfast by the fireside before the sessions began. I prayed for a good turn-out. When I stepped out of my study and turned down the hallway I could immediately see that my prayer was answered.

The foyer was filled with men. There were over a hundred men in attendance. Worship music was playing in the auditorium, but there was another sound. It was an unusual sound. It was unlike any sound that I had ever heard in our building before. It was the sound of voices, but deeper than the usual pitch of joyful chatter I am used to hearing. It was the sound of the voices of men and it was pleasant to hear. It was loud. It was low. It was almost throbbing. It reminded me of the distinct sound of a well-tuned Harley—like a throaty rumbling.

This week I noticed on Justin Taylor’s blog that C. S. Lewis said; “There’s no sound I like better than adult male laughter.” (—cited in Walter Hooper, C.S. Lewis: A Companion and Guide (HarperCollins, 1996), p. 16.)

Of the things that access our souls through our ears one of the sweetest must be the sound of men’s voices in enthusiastic praise and worship of their Creator God.

One of the greatest experiences of my ministry was a weekend leading hundreds of men in singing at a Men’s Conference. It was a simple affair, a single leader, a gifted piano player, and traditional hymns, but all who were present were confident that the Lord visited that singing in a very special way. I had an overpowering sense of the Spirit directing that singing. When each song concluded there was a burst of shouting and enthusiastic, God-centered applause. Men arrived early for the sessions so they would not miss the worshipful singing. Some testified later of driving home through the night after that week singing the hymns in the car all the way home.

My current favorite music is a recording of five thousand men, mostly pastors, singing hymns at the Together for the Gospel Conference. It is powerful, anointed, music. It always draws my heart to God. This year I attended the conference with one of my sons and his pastor, as much for the singing as the preaching. There were seven thousand in attendance this year and we were not disappointed with the singing.

Every year I look forward the time at Camp Barakel in northern Michgian just before I speak. I gather my final thoughts, pray, pick-up my Bible and start toward the chapel with an indescribable delight in my heart. I can smell the sweet tang of wood smoke. I can hear the piano preparing the hearts of men for worship. Soon the musical praises of men will ring through the chapel and echo out across the lake. What a unique, pure sound.

Imagine the day described in the seventh chapter of the Revelation when angels, living creatures, elders, and believers—saints from every tribe and tongue and people and nation, numbering ten thousand times ten thousand, explode in praise like musical thunder!

Until we gather together there, may the Harley-rumble of men in laughter, praise, prayer, and fellowship never die.

The Parable of the Sower