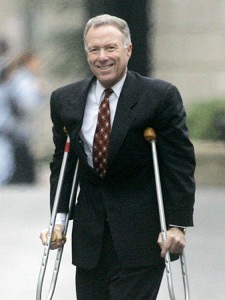 I have something wrong with my ankle. It may be broken, but it is probably a damaged ligament or bone chip. The doctor ordered a MRI, so we should know later this week. It has forced me off my feet. I have to walk on crutches. I find myself envying people who can just stride around wherever they go. I get frustrated a lot. I feel sorry for myself. I’m not sure how long I will be injured. There are things I wanted to do that I can’t do. My clothes are all in the basement. I am used to grooming there. I can’t walk down there. I can’t go much of anywhere without pain.

Last night I wanted to take the family to watch fireworks for the Fourth of July. I let them know that I would drive them but that I was not going to try to get out of the car. It’s too difficult and exhausting to get around on crutches.

We found a place to park along the street in Trenton near the river. Hundreds of people walked toward the waterfront to watch the fireworks display. It was interesting just to watch people. They were all walking. Every where walking on strong legs and firm ankles.

After we had been there for about an hour one of the children said; “There’s another guy on crutches.” He was coming down the sidewalk toward us, walking quite a distance. I thought; “Why would anyone want to walk that far on crutches? That would wear me out.”

As the young man got closer I realized that he would never walk normally again. He only had one leg. Something about it just broke my heart and humbled me. He will never throw his crutches away. He will never run or walk or live a life that we would call “normal.” He will never do a lot of the things that I will almost certainly do after a few weeks or a few months of treatment. He will always be left out of things that other people are doing. He will probably never ski or hike or take long walks with his lover.

A sat for a while and just cried, while God adjusted my spirit and exposed my frustration, anger, and self-pity. I think it was something I needed to see.