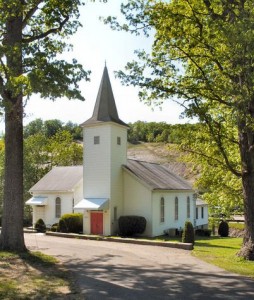 Mercer Chapel on Spring Road was a little white-frame community church. Like thousands of others, a fixture of the American countryside. Set in a cemetery, its patriarchs and matriarchs slept near by. It was a pleasant slow-paced congregation. Volleyball league and Ladies’ Aid. Strawberry suppers and ice-cream socials. Pot-luck dinners and Class parties. Christmas pageants and Easter bonnets. Good cooks and farm kids. American Traditional. Sort of a Norman Rockwell print.

The people were good to us. Elmer Brown introduced me to “punkin’ blossoms.” His wife Edith worked at the phone company. Clyde Winzlet was Quaker, stern but good as gold. His wife Vera was Pentecostal. Their compromise was our Community Church. Hank and Cora Linfeld couldn’t have children but they enjoyed everyone else’s. They were very frugal, but hey were generous with us. Harold Peters was a good man. I noticed everything went smoothly in the church if I would drop in and spend a couple hours drinking coffee with him every few weeks. His wife, Mildred had a kind smile and made a good pie to go with the coffee. They were proud of their children who were as old as my parents. Rich and Barb Thompson were younger. Bob loved to bowl and could recall his games frame by frame years into the past if you showed the slightest interest. He would do anything to help you. Barb especially loved and be-friended my wife, Lois, who was new at this “Pastor’s wife” thing. Jerry Haynes was a big, good natured, farmer with an infectious laugh. His wife Kate was a fabulous cook. Not in the gourmet sense, but in the farm-wife sense.

They were good folk. Salt-of-the-earth. They put up with my youthful mistakes and inexperience. Like most country churches, the folk were pretty much satisfied with the way things were and things hadn’t changed since anyone could remember. But from time to time they set aside their resistance to change to let me try some of my new ideas. They didn’t even vote me out when I got a “permanent” even though one of the ladies said she couldn’t take me seriously until it grew out. (A “permanent” should really be called a “temporary”, I think).

The parsonage set across the road. A neat Cape-Cod on a square of green lawn cut from the corner of a grain field. Lois put in a small garden while growing large with our first-born. We brought our little son home from the hospital to that little house and the good people rejoiced with us.

The pay was not much. I supplemented the small income by selling Fuller-Brush door to door in the next county north. People helped too. It was common for people to load me down with sweet-corn, tomatoes, string beans, zucchini, or berries when I made my pastoral calls in the countryside. Sometimes, after I offered prayer, they would send me home with a nice cut of meat from their freezer.

Many Sundays as I stood on the steps shaking hands with a parishioners one of them would slip a few dollars or a check into my hand. Once at Christmas time they presented us with a small artificial Christmas tree. There were dozens of tiny Christmas packages tied to its branches. We will never forget sitting in the living room of the parsonage later that night un-wrapping each of those little gift ornaments. We were delighted to discover each of them contained ten or twenty or fifty dollar bill. When we finished counting it equalled nearly a month’s salary. As you can imagine we grew to love the people at Beaver.

There were, however, irritations to endure. Bob and Bertha were two of them. Bob was the church janitor. Bertha was the assistant janitor and church pianist. They were conscientious, as far as that goes. They arrived early. They were careful to wrap things up and turn off the lights and see to it the doors were locked.

But when you were trying to talk after the service Bob would stand at the back of the room and turn the lights off one bank at a time. You felt like he was trying to sweep you out of the room like so much dirt so he could lock-up and go home.

Then, there was Bertha’s heel-dragging. I always wanted the piano player to play for five or ten minutes before the service began. It would set the atmosphere and encourage people to gather in. A sort of emotional preparation. I asked her regularly to do this but she wouldn’t. What she did was sit with her husband as if she didn’t plan to play at all until I went to her and specifically asked her to begin. If I asked her too early she would simply stay in her seat and rummage in her purse or get involved in conversation. I would have to ask her again. She refused to take that bench even one minute before the announced starting time of the service.

It’s hard to lead a happy song service when you are mad enough to wring the piano player’s neck.

And there was the vacuum. Bob and Bertha were responsible to vacuum the building each week. They didn’t want to make a special trip out to the building, so they did their clean-up before the Wednesday evening meeting. Now this service was important to me. I would often have special hand-outs or audio-visuals. I wanted to make the service helpful and worth attending. I always wanted to have some music playing when people arrived. And because I was expected to stop right on time, I wanted to get started right on time, too. I took this meeting seriously.

Bertha took her job seriously, too. The church owned a huge canister vacuum about the size of a fifty-five gallon drum that sounded like a 747 taxiing into position for takeoff. Bertha would drag that thing down the middle aisle to the front of the church and fire it up minutes before the service would begin. It made conversation impossible. To make matters worse, she would jab the ground around your feet with the wand so you felt like livestock being prodded into submission.

When the appointed meeting-time arrived and people had made their way through the obstacle course to their seats, she would shut off the contraption and while it wound down she would slowly make her way to the platform plunk herself on the bench. She would let out a big “I’m-so-overworked” sigh and roll her eyes my way to hear the number I announced. Every week she would leave that monstrous appliance sitting square in the middle of the aisle during the service. It looked like aliens had dropped in for prayer meeting and parked their space craft up by the altar.

We survived the experience and went on to work with other people in other churches in other states. Most of them were energetic and cheerful to be serving the Lord. Some of them required a little more patience and tact. But Bob and Bertha were in a class all to themselves.

I suppose if you were to go to Mercer Chapel this Wednesday night you would find them still faithfully serving the Lord …weather they liked it or not. I wonder if the Psalmist David knew anybody like Bob and Bertha when he wrote; “Serve the Lord with gladness.” (Psalm 100:2)

*It’s probably best if you assume this little story is fiction.

A Word in Passing