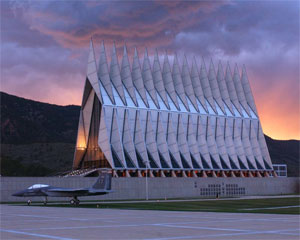 Well, now I’ve just laid down the Saturday paper in disgust. Yet another scandal in high places. This time military leader had been exposed for wrong-doing after 26 years of service to God and his country. He is the second-ranking officer out at the Air Force Academy in Colorado, Brig. Gen. Johnny Weida. He was up for a second star but the Senate did not act on his promotion. Seems that his darker side has now come to the surface and now he has to pay. It has come to light that he was involved in a little scandal back in 2003 and there’s no covering it up now.

He is one of those “born-again” Christians and he is not keeping it to himself. According to charges he has been urging cadets and staff to pray. He even went so far as to say that they are “accountable first to their God.”

Maybe I’m just a little sensitive, being a one of those contemptible “born-agains” myself, but I have some questions. Have the senators read history during the course of their training? Are they aware of the overt faith of our founding fathers? Have the read the writings and addresses of George Washington? Have they seen a print of him keeling in the snow at Valley Forge? Would they consider him a worthy military leader? Would they have confirmed his promotion? Would they dare sensor him for being a man of faith and urging others to pray and consider their accountability to God?

Aren’t there real scandals they could attend to? Might they even consider policing their own ranks rather than participating in clear discrimination against an officer of good reputation and faithful service? Do we really want to be governed by men and woman who consider prayer and accountability to God scandalous behavior?

They say after 26 years of faithful service with an impeccable record Gen. Weida has issued an apology. I think the senators should apologize.

Prayer at the End of a Difficult Day