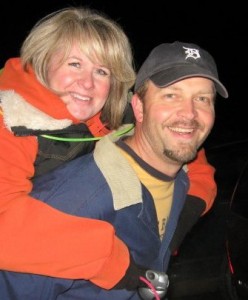 It’s no exaggeration to say that Tom Count’s pack weighed sixty pounds. That’s a big pack for a short hike, but we weren’t on a short hike. We were in the Algonquin Wilderness in Canada and we would cover 110 miles in six days by canoe and portage. The Canoes would carry us or we would carry our canoes and packs over every single inch of it. We would carry our gear and canoes and food over some beautiful but rugged terrain. Tom had done this before and he’s a bright guy so I supposed he knew what he was doing, but I questioned the wisdom of packing so much stuff so far.

My son Daniel and daughter Hannah and I shared a canoe. One afternoon I was distracted by the beauty of the water we were entering at the end of a portage. We got our canoe into the water sideways. We were swept back toward a section of jagged rocks that would dump us and wet all our gear if we hit it. We paddled furiously but I knew that it was hopeless. Pack and all Tom jumped into the water and helped keep us upright. Pack and all. I thanked him and shook my head. We were all really grateful to have dry gear that night.

Each of us carried his own food—just enough for the week. I asked Tom about the size of his pack. He said he brought extra food. I figured he had a big appetite, what with all the heroic deeds and all.

He said, “It’s a long way to Wendy’s from here. For the next week if you eat it you carried it in.” In our party we caught one fish all week and shared it among a large group. You would not believe how good that little fish tasted out there in the wild.

By Friday most of us were running very low on food. You burned calories like a weight-lifter out there paddling in the wind and water. You ate like a football player at the training table. We would be done on Saturday. Friday almost no one had any food left to speak of. I had just the bare essentials. lonely down in the bottom of my food bag. At that point you started looking around and considering killing and eating the weak. Dan paddled across large lakes toward the end of the week chanting Baconater, Baconater, Baconater…

It was Thursday or Friday that we were all sitting around the fire talking and Tom said, “Hey, I’ve got some extra food, if anyone’s out of grub.” He started pulling things from his pack and tossing them to people who called out like frenzied teens at a rock concert. I was salivating among them. Tom gave me a heavy pack of lemon-pepper tuna. It was good, so good. He gave lots of stuff to lots of people.

He carried this stuff in his heavy pack all week so he could be a blessing on Friday when he knew everyone would be hungry.

I just sat there and shook my head again, this time in admiration.

Are you pakin’ anything to give away when everyone else has had a hard way and can’t go on?

Tom led a young guy to Christ on that trip. The boy is in Bible college this fall. He got wet to keep us dry. He packed extra food for others. Last night Tom sang in church and I was thinkin’ about that.

Praying in The Night