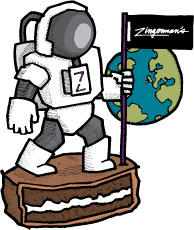 Have you ever had a Moon Pie? I had them once or twice when I was a boy. Where my wife grew up Moon Pies where a major food group. The locals say you’re supposed to wash them down with an RC Cola. I suppose that is because they are dry and waxy. I think you have to be pretty hungry to like them.

Don’t be angry with me but they have just never done much for me. They come in flavors like banana and chocolate. They are wrapped in cellophane. It think, originally they were wrapped in wax paper. They are round, a little bigger than hockey pucks, and have a comparable texture.

Moon Pies are the kind of thing you can get away with feeding children who have few options, but they are not something that you find in the church cookbook or at your grandmas for Christmas dinner.

We frequent a little deli/bakery in a place called Kerrytown near Ann Arbor. They make unique and delicious pastries. Earlier this year we happened in and noticed they were selling something new. It was what they calked an “Over the Moon Pie.”

They were Moon Pies on growth hormones. The dropped the grahm cracker filling, used real marshallow, included moist, dark chocolate cake and covered the whole thing in rich chocolate frosting. And there they were sitting just south of the gourmet coffee. We each had one. We bought a third to take home. It never made it. What can I say? When I finished mine I still had a half-cup of gourmet coffee left and I didn’t want it to be lonely.

Sometimes Lois and I will be sitting quietly at home and one of us will say to the other, “Wouldn’t an Over-the-Moon Pie be good right now?

Truth is the Over-the-Moon Pie at Zingermann’s is actually called “Over the Moon Pie” and it is reason enough to drive to Ann Arbor all by itself. We’ve never done it, but I have valiantly resisted the temptation on a number of occasions.

You would not get me out of my recliner for a standard, run-of-the-mill moon pie. Buy now I’m sure you understand that if you have never had an Over-the Moon Pie you’ve been deceived into believing that you have experienced moon pie. You are a victim of a cruel scam. Trust me. I know these things.

My goal in life has nothing to do with pastry. I want to nudge everyone I meet ever day closer to Jesus. When I talk with people about faith and about Christ, many of them think they know Jesus, but they only know about Jesus. I’ve noticed that many who know a little something about Jesus, church and the Bible have settled for a cheap, plastic imitation of Jesus. They think they know Him and have experienced him, but they have not. They may have been church-goers at one time, but they secretly feel that the whole Christianity-Church thing is over-rated. They tried it and it just didn’t seem worth the time and effort. Others have found it empty, but they trudge on out of a sense of duty or to please others. They have never been awed or thrilled or stirred or transformed by Jesus because Jesus was little more than an empty ritual, formalism, moralism, or tradition to them.

Many are disillusioned or disinterested in Jesus because they know about him and they know people who claim to know Him, whose lives are really not attractive or convincing proof of the power of Christ to transform.

There always have been dark spirits at work to blind people to the beauty of Christ and to make them believe they have met Him, when, in fact, they have not.

Those who know Christ by saving faith are forever transformed. They are thrilled and awed and satisfied with Jesus. If that is not your experience could I humbly suggest that you seek Him with all your heart until you understand and experience what I am talking about.

If I can help, let me know. There is a way you can know Christ in a transforming way. It’s almost Christmas. It’s a perfect time to seek Him.