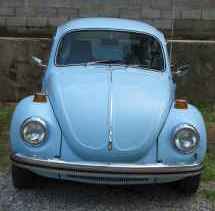 When I was a college student I developed a taste for music that was not honoring to God or consistent with the things I professed to believe. One wintry night I decided to make my way to the mall and visit a music store to buy an album of music that I really should not have bought.

I drove to the mall and bought the album. I was eager to get back to the dorm where I could listen to my new album on my record player. Walking out of the store I head someone say, “Hi, Ken.”

It was Donna, a nice, Christian girl from the college.

“How are you doing?”

I held open the bag and turned red as she looked into the bag at the album that I had violated my conscience to buy.

Snow was falling on the way home. Approaching an intersection the car began to slide. It seemed to pick up seed as it slid into the back of a big truck with a huge, rusty, home-made angle-iron bumper. The truck was unharmed but my VW had a permanent crease right across the hood just under the headlights.

When I got back to the college I was embarrassed and frustrated and cold, but I was still eager to listen to my new album. I tucked it under my coat so no one else would ask about it and I ran toward my dorm. A few feet from the stairs leading to my dorm I stumbled jumping over a pile of snow. The record was brittle from the cold and when I feel it broke. I didn’t have any business with that record in my collection.

Today it’s all hip among trendy Christians in ministry to use the music and media of our culture as an enlistment tool or to illustrate their messages. That is a little like removing the poison labels and storing the poison in the pantry. If people feed their flesh on the false philosophies that are in direct antithesis to the word of God it will do them harm. The media, the movies and music or our culture are embedded with the poison of false philosophies. They aren’t harmless or neutral.

It is reasonable to expect that the media of our culture will reflect the values and opinions and beliefs and god’s of our culture. So you can expect sensuality, materialism, nihilism, and universalism in the music and movies of the culture.

The music of the church of God and the people of God should be the opposite of that. There should be a great distinction here. We should fill our lives with media that are Christ-honoring, Christ-exalting, and filled with grace and truth and reverence for Christ. Our media should manifest the glory of God.

Since we have the pure word of the Living God, and since we have the aid of the Holy Spirit in our task, we don’t have to resort to cheap tricks to lure people in or get them to listen. Truth is more powerful and effective then cool will ever be. It’s not about cool or culture. With the law of God and the gospel we appeal to the each person’s conscience.

In 2 Corinthians 4:2 Paul wrote: But we have renounced the hidden things of shame, not walking in craftiness nor handling the word of God deceitfully, but by manifestation of the truth commending ourselves to every man’s conscience in the sight of God.

Why The Terrorist Threat?