Ten inches of snow fell last night from about 3 o’clock Sunday afternoon to about midnight. I had some shoveling to do. There were ten inches in the Granville Cottage driveway.

I dragged my heals getting going reading news on my iPad and then warmed-up the car and went to the gym like a sleigh-ride. When I got home I started clearing the snow. Something about lawn-mowing and snow shoveling clear my mind and stimulate creative thinking like a Venti black brewed Sarbucks coffee with four shots of espresso.

While I was throwing snow with my old-fashioned shovel I heard a familiar musical sound. I straitened my back and stood in silence listening. The dominant sounds were the wind and a familiar bird song. It was the two-note song of the black-capped chickadee.

The black-capped chickadee is the state bird of Maine and Massechuetts and the Provincial bird of New Brunswick in Canada. But this one was a Michigan Chickadee. He was perched in our pear tree alone this morning singing his two-note song for all the winter world to hear.

The black-capped chickadee doesn’t migrate in the winter though he may move south within his range. On cold winter nights he can reduce his body temperature by 10-12 degrees to conserve energy.

He may have been singing to entertain me while I shoveled, but the experts say chickadees are popular with other birds because they have the habit of calling out when they have found a source of food. Maybe he was just repeating his little two-note restaurant review for the other neighborhood birds to hear.

They say that during the winter some chickadees will take seeds out of your hand if they are accustomed to humans. You can find videos of this on the Internet.

I was walking along a footpath following a ridge on the West shore of Wolf Lake near Watersmeet, Michigan one winter day when I heard a flourish of music in a fir tree at about my eye level. It was a chickadee party. I walked over to them. They made no attempt to leave. I could have reached out and touched them. Some of them hopped toward me on a branch. They looked directly at me as if they were curious. I stood there in the white, green and silver world of the winter forest and frozen lake and watched them for a while without moving. It still makes me smile when I think about it.

Last summer Chuk trapped a chickadee in the backyard for a pet. Everyone told him he couldn’t do it but he did. He held the bird for a day or two and then released him back into the wild world where he belonged. Maybe he came back this morning and sang up in the pair tree while I was clearing snow to say thanks.

It’s cold outside and after an almost spring-like week it’s winter again. But I’m still singing. I like white and icy better than gray and brown and wet. 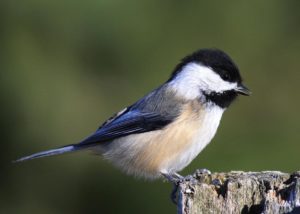 Seeing the Sacred in the Mundane