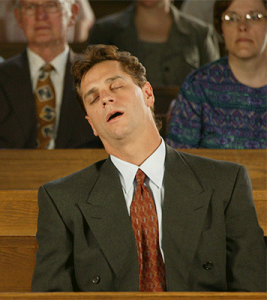 Clay Nuttal has been a pastor for fifty years. In my in-box today was this little nugget I am trying to take to heart when I preach. What are your thoughts?

The cardinal sin of preaching is making any reference to time. You want the listener to be thinking about message content, not the clock. The minute we mention time, their minds are somewhere else; and often it’s hard to get them back. As preachers, we fail to think through how people may respond to disclaimers. If toward the end of a message we say, “This is my last point” or “I am almost done” or “In closing” or any other reference to time, people start zipping up their Bible covers, putting on their coats, and mentally ordering dinner at the restaurant. At this point, we have lost their attention. We might just as well quit and go home because, mentally, they have already left the room.

We should never give our listeners a clue as to when we are going to end. We want to finish while they are still with us, both mentally and spiritually, with faces turned up and Bibles opened. If you begin to pray at that point, hardly anyone will move around. You can quickly thrust home the point of the message and ask for a response. Of course, if the message has no major point, and the sermon was not leading them to make a decision, one might as well pass the restaurant menu around; it was all over before it even began.

At this point, as preachers we tend to shift into our pious mode: “If they were spiritual like me, they wouldn’t be thinking about the clock and their dinners”. You can do that if you are preaching to rocks, but preaching to people is another thing altogether. A well prepared and preached message will cause people to feel as though you have been at it for only a few minutes, even though you may have a clear agreement with them that they can expect sermons to be no more than one hour long.

Here is another consideration about time. People expect integrity and honesty. If it were understood that my messages would be 30 minutes or 60 minutes long, then that is what I should do. A lot of good questions should be asked about us when people don’t know what to expect from the pulpit. Of course, if the blessing of God has fallen on the congregation, and dozens of people are repenting or coming to Christ, then feel free to PREACH ON, BROTHER! I am afraid, however, that many a preacher just doesn’t even realize it when his congregation feels “that there is a dry dust storm in the building” and that “the man up in front just likes the sound of his own voice”.

I don’t know how many pastors read my blog, but I wanted to post this just to remind myself of what he called the “Cardinal Sin of Preaching” –Making any reference to time…