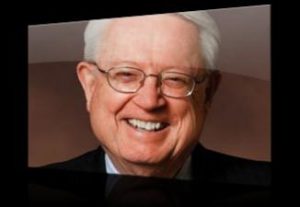 I don’t want to shock any of you but in a shadowy season of my past I drove what they called a “Roach Coach.” It was actually a squeaky-clean, brand-new catering truck outfitted to service factory workers. I would drive up to a factory at break time. Someone would shout out “Roach Coach” and workers would line up to buy hot coffee, hot chocolate, hot sandwiches, donuts, chips, pretzels and candy bars.

After servicing the workers I would tidy the truck, restock items that were getting low and face things up nicely for my next stop. On the way to the next stop I listened to the radio, WEEC out of Springfield, Ohio.

I was twenty-one years old and just married. I was eager to finish my training so I could be a pastor. For seven years I had known that God was leading me to be a pastor and a preacher. I had been preaching since I was fourteen and I had pastored a small country church from August to August by last year of High School before leaving for Moody in the fall. Now I was married and eager to finish and find a pulpit of my own.

I noticed how Charles Swindoll taught through the Bible a section at a time with accuracy and clear practical application. I hungrily listened to every broadcast. He didn’t sound angry. He wasn’t harsh and gravelly-throated. He was timeless, but not dated. His applications and illustrations were fresh and creative. He was fastidiously faithful to the text. He was appropriately serious, but in every message his sense of humor was evident. He sounded like he preached with a smile in his heart.

Looking back I realize that I learned a lot there in the cab of my truck driving from job to job. God was deepening my thirst for ministry. I was inspired and instructed through the example of Chuck Swindoll. I was probably influenced more than I initially realized by his style.

Later he would leave First Evangelical Free Church in Fullerton, California and become the president of Dallas Theological Seminary where he would influence thousands more.

I thank God for the men who had modeled ministry and preaching and godliness to me through the years. My Dad, John MacArthur, Haddon Robinson, John R. Rice, George Sweeting, Joe Stowell, Bill Thrasher, Del Fehsenfeld, John Piper, and others. May God repay them for their example and faithfulness. (This is a partial list).

There is hope for our broken country as long as there are faithful preachers in the land who will preach the Word of God creatively and passionately and seriously with a smile in their heart.