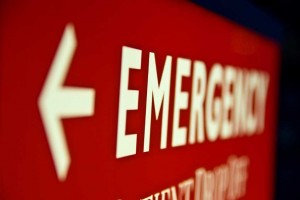 I was just finishing some yard work when I saw a Hispanic man drive up in a pick-up truck. A young man was with him, later I found out it was his son. I smiled and waved, he smiled a waved back. They unloaded some equipment and went to work. I finished packing my things away.

They had not been there five minutes when suddenly there was a load bang. The young began to scream over the noise of the power equipment, “Father, father! My father is hurt. Help me. Help me.” His English was broken. I could tell he was having difficulty making himself understood.

I ran over to help. His father was on the ground with a huge gash in his leg. Blood was everywhere. I pulled out my cell phone to call 911. Blood splattered on the face of the cell phone and I miss-dialed twice because I could not read the numbers. The old man’s leg was bleeding badly. His son was trying to tie a tourniquet around his leg. I couldn’t hear the voice of the other end of the line. I ran out into the street to get away from the noise.

I tried to be calm so that I would not have to repeat myself and waste more time. The 911 operator was speaking in a casual unhurried manner, asking for details that did not seem vital.

I started to shout, “Please get an ambulance here right a way. I man is bleeding to death.” I ran toward the end of the block to read the road sign so that I could tell them the name of the street. I ran back to tell them the house number.

It was a beautiful autumn day and there was a little church bazaar being conducted on the street. I woman called to me, “Would you like some roasted chestnuts or pumkin pie? We have fresh coffee and apple cider, too” She must have thought me rude. I couldn’t even respond. The very idea of stopping to explain to her was repulsive. Less than a block away a young man was struggling to keep his father from bleeding to death.

In the distance I could hear the siren coming closer. I stood back while they quickly loaded him up and drove away. I stood and listened to the music drifting over from the church. There was a murmur of peoples voices, the smell of food, and the sound of wind blowing through what leaves were still clinging to the trees.

My heart would not stop pounding. I walked back through the garage into the backyard. The equipment lay silent on the ground. Blood was everywhere, and parts of the man’s clothing torn away in the desperate struggle to save his life. The old red Ford pick-up sat facing the alley with the tail-gate down.

My head was swimming. I got in the car and rushed to the hospital. I parked my car and hurried across the parking lot into ER as the sun slipped from sight. When I got into the Emergency Room they showed me into the room where the man was being treated. The young man sat beside his father with his head in his hands sobbing deep, soul-wracking sobs. “He’s gone, my father is gone. He’s gone. We didn’t get here in time. Too late. He’s gone.”

I put my arm around his shoulders and cried with him. In that moment nothing else in the world seemed to matter at all. Everything else seemed to trivial and foolish compared to the tragedy of violent death I had just witnessed.

I sat in my car for a long time unable to drive away, wondering if I had been faster, or if I had known first aid better, if the man would still be alive, the boy would still have a father.

I started my car. The cell phone rang. “I’ll be right home. I’m sorry. I’ve been delayed. … No, go ahead and start supper without me, I’m not hungry. I’m really not feeling well. I love you. I’ll see you soon.”

When I closed the phone I could see my hand and the phone were covered with the blood of the man I tried to save.

I drove back passed the little church. It was so quaint. People were putting things away. Light was shinning out onto the street. The people there were completely unaware of the tragedy that had unfolded a little over a block away during their church bazaar. People are dying, they are dying within sight of our churches, dying all around us. How can we trifle away our lives.

In my mind I could see the face of a pastor friend telling the story of Charles Simeon pointing to the portrait of Henry Martyn, missionary to India who had only a few brief years of service before his death and saying, “Don’t trifle, Don’t trifle.”

And then, mercifully my cell phone began to ring. I use it for an alarm clock. To my relief the whole tragedy had been born and lived and died in my dream. My alarm rescued me from a nighmare, but the phrase remained in my mind: “Don’t trifle. Don’t trifle.”

J. C. Ryle tells the story: “At Cambridge, the other day, I saw a picture of Henry Martyn, bequeathed by Mr. Simeon to the public library. A friend informed me that that picture used to hang in Mr. Simeon’s room, and that when he was disposed to trifle in the work of the ministry, he used to stand before it and say, “It seems to say to me, Charles Simeon, don’t trifle, don’t trifle; Charles Simeon, remember whose you are, and whom you serve.” And then the worthy man, in his own strange way, would bow respectfully, and say, “I will not trifle, I will not trifle; I will not forget.”

‘Tis not for man to trifle; life is brief
And sin is here.
Our age is but the falling of a leaf,
A dropping tear.
We have not time to sport away the hours;
All must be earnest in a world like ours. -Horatius Bonar