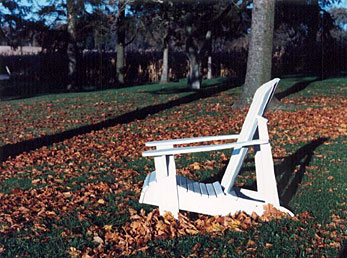 My Grandfather named things. He named his cows. He named his tractors. He even gave my Grandmother a nickname. She had a perfectly good name when he met her. It was a beautiful, appropriate, honorable name that fit her perfectly. Her name is Grace but grandpa always called her Tiny.

My Dad acquired the habit of naming things from him. His names have never been literary masterpieces. They are more playful and descriptive. Examples include names like “Tricky Little Copper” and “the Cardboard Bank.”

I’ve named a few things myself. (Ask me about my bike someday).

Years ago I was assigned to accompany a group of teenage girls to summer camp. I had been under a great deal of pressure from a new series of responsibilities. I was adjusting to a difficult boss. My family was young and I wanted to spend time with them more than anything but I had no choice. The trip was required.

The camp was on an island in up state New York. When we arrived I rode the ferry to the Island to get them acclimated. I helped them to their cabins and began to look for mine. I was informed that there would be no room for me on the island. I would have to stay on the mainland. I would also have to share a room. The room was in an old inn and the inn was not air-conditioned. I was disappointed that I would be separated from the young people.

While I was unpacking my things my roommate informed me that they only served two meals a day. I felt like I was in for a long, difficult week.

But the inn turned out to be charming. The week was cool with low humidity all week and I still fondly remember the food. My roommate was a fascinating man who ran triathlons but was willing to allow me to pace him on morning runs. The students on the island were absorbed in their own schedules and friendships. That allowed me to attend the preaching sessions of two very different but gifted expositors of the Bible. I enjoyed a week of beautiful sacred music and skilled bible teaching.

I ran in the mornings, visited the students, ferried back for the late morning preaching sessions and spent the afternoons reading in an Adironcack chair. The chair sat on a hillside overlooking a beautiful mountain lake under fragrant pines.

It was the restoration of my soul. At the bookstore I purchased a devotional title that matched my mood. The little reprint was called “Pleasant Paths.” The author was Vance Havner.

Over the years I would collect every Havner title I could find. His essays were devotional essays with a keen eye to nature. They were bite-sized, witty and engaging, and warmly devotional. Hanver was an evangelical Will Rogers.

I went way from my relaxing week convinced of three things. First, I knew that I would need to leave the place where I was ministering. Second, I would read everything I could get my hands on by Vance Havner. And finally, I would someday own an Adirondack chair.

A few years ago we attended a festival in Coshocton, Ohio. Music drifted through the air along with the smells of various delicious foods. The music came from an eccentric old fiddler we came to know as Charles Stienman.

We struck up a friendship with him and eventually visited his home. On his porch was an Adirondack chair. I commented on it and he said; “Oh, I hate that thing. If you get in it you can’t get out.” I thought; “If I get in it I wouldn’t want to get out,” but replied; “If you are ever looking for a buyer for it, let me know.” He insisted that he wanted to give it to me, but I didn’t take it.

One day in autumn I stopped by his house with a twenty dollar bill to see if I could talk him into taking money for the chair. I told him I would like to buy the chair and asked him to set a price. He wouldn’t. Finally Lois said; “It’s worth a lot more, but would you be willing to take twenty dollars for it?” He looked at her sternly and growled; “I wouldn’t think of taking more than fifteen.” I have enjoyed hours of reading and rest in that chair.

I like simple things that are well designed and well built. I like low maintenance things that last. You don’t serve them they serve you. They fit comfortably into your life like an old sweater and you will still be enjoying them long after the Goodwill has adopted that “Tickle Me Elmo” that was essential to little Suzy’s normal childhood adjustment. I like simple things like a good jackknife or harmonica you will still cherish for years after you have taken five dollars at a garage sale for the video game system that you will buy with your Visa card this Christmas. (Have you ever had the urge to give your video game system a name you would be willing to use in front of your mother? I don’t think so).

One Saturday this fall, I gave my Adirondack a nice thick coat of white oil-based paint. He’s looking good. He’s sitting over in the corner of my room right now. I’m thinking of giving him a name. I wish you the best and that includes a few things in your life worth naming and some restful times to enjoy them.