A few years ago we lived in a place where natural beauty was sparse. There were usually birds in view, some geometrically placed trees, plants clinging to life, and the ever-changing sky. There was a river that ran by at the foot of the hotel in which we lived. On a clear day standing on a footbridge you could see that the river really is, amazingly, teaming with life. Waterfowl floated on its surface. Big fish prowled the bottom, Catfish and Suckers – Bottom dwellers. City dwellers. They are evidence of lower forms of life that make up their diet. They say a peregrine falcon was nesting on a ledge high on a building across the river. The boys saw it dive and attack it prey. They say it was almost pitiful to watch the falcon dive with such velocity and force killing its prey in mid air.

There were plants, flowers, flowering ornamental bushes and trees here and there and they were real even if they were synthetically arranged. They were not in the wild. They were still beautiful enough to stir life in your heart when they caught you by surprise in a shaft of sunlight on a brisk morning run or mellow in the fading evening.

One morning we got a glimpse of nature up close. It was interesting. There was a rat in the restaurant one morning. 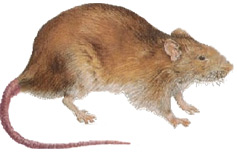 I’m not talking about a mouse. Mice are as common as houseflies in the horse barn. I am talking about a rat. A rat the size that would easily rival anything born and bred in the bountiful cornfields of central Indiana. This guy was sitting on the floor in the middle of the restaurant like he had dinner reservations and he was waiting on someone to take his drink order.

It was one of my sons who saw him first. In the dim light he thought it was a child’s toy and bent over to pick it up. It didn’t move and he would have scooped it up had it not moved its tail just before he touched it. He felt the tail brush across his sandaled toe and froze. He went for reinforcements. One of our valiant young men found a cudgel nearby and dispatched him swiftly from this earth. There are some forms of nature that we are really not always eager to enjoy.

We contracted with a pest-control company. The health department would take a dim view of us keeping a pet rat in our restaurant. We try to keep in their good graces. It’s just good business practice. When we want to see wildlife we prefer to pay for admission to a zoo or happen across them in the woods or in the sky or on the surface of the lake, not as uninvited guests in our home. That would be a level of hospitality we would not be comfortable with. We like to get out in nature but when nature invades our space we euphemistically label it a “pest” and use deadly force to expel it from our lives.

We don’t mind a hound at the foot of our bed, an eagle tracing across the sky, a kitten curled up by the fire, or an elk on a stark mountainside, but we draw a line at a rat in the kitchen. Everything has its time and its place and when I see a rat in the kitchen I just think, not here. Not now.

Dispatches from the Front