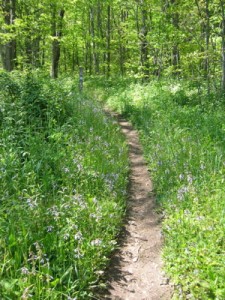 On a summer afternoon years ago our oldest son Kyle came in from playing out in the back with a friend looking serious.

“We were talking. I was witnessing to him.”

“OK, I guess,” Kyle says—lines in the forehead.

“Kyle, you’re right. I don’t think he understood. Let’s pray for him. Maybe someday he will understand.”

What’s sad is that most people don’t understand the gospel and if they think they do they see it as a cheap and easy free-ride to heaven when they die after a life of living any way they want.

They really don’t get it and we should have a concerned look on our face to say the least.

If anyone is qualified to talk about the way to Heaven it is the One who came from Heaven, made a way for men and women to get to Heaven and is seated in Heaven now… the Lord Jesus.

As Jesus began his conclusion of the Sermon on the Mount he had something shocking and sobering to say about who goes to Heaven and who doesn’t go:

“Enter by the narrow gate: for wide is the gate and broad is the way that leads to destruction and there are many who go in by it. Because narrow is the gate and difficult is the way which leads to life, and here are few who find it.” (Matthew 7:13-14)

I don’t know what you think, or what you have heard, but that’s what Jesus said about how hard it is to get to Heaven.

You really don’t hear people talking that way much, do you?

Ray Comfort is an evangelist from New Zealand who is all over the web. He noticed how many false professions and how many false converts there were in his ministry. He began to study the Scripture and the lives of great evangelists of the past and noticed that his evangelistic strategy was lacking something that Jesus and effective evangelists of the past emphasized… They often didn’t give people the gospel until they were silenced with conviction by the law of God.

Ray Comfort began to teach the law before he gave people the gospel and he began to see more people genuinely converted to Christ.

Most of you know that Kyle is a pastor in northern Indiana now. I called him to tell him that I was going to tell this story about Rusty and confirm the details. He said, “Do you remember that you had taken me to hear Ray Comfort speak and when I came in from talking to Rusty I was thinking, “I don’t think I gave him enough law…”

Every Life Has A Story

Thinking About the Rest of My Life

Our Last Cup of Coffee