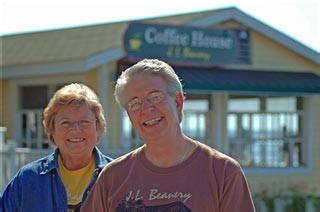 Last week Lois and I took our girls to Mackinac Island for a mini-vacation. They had never been on the island before and I promised them that someday I would take them. Tuesday was “someday.” It was perfect weather to enjoy the island.

From the balcony of the Inn where we stayed a big waning moon rose over the harbor. Hope and I took a moon-walk, the most beautiful I have ever taken. We walked out to the eastern shore of the Island and stood and looked at the silvery light of the moon on the water. The harbor bell clanged out on the lake and the water lapped on the shore and Hope and I held hands and talked. We must have walked for miles. When we got home we slept well.

Wednesday was officially the last day of summer. I watched the sun rise and strolled to my favorite little coffee shop on Mackinac. Horses clopped by and people on bikes peddled along the street. No automobiles are allowed on the Island.

The coffee shop is a cheery yellow building about the size of a garage with white-trimmed windows all around that open to let in the cool lake breeze. It sits right on the harbor. I took my Bible and a cup of coffee to a chair by the fireplace for a while. Later I moved to a table by the window and looked out on the little lighthouse in the harbor and down into the clear water.

As I wrote in my journal I thought about the workers on the Island. Most of them are from other countries. One of the things I wrote was this, “I wonder if it would be fruitful to do some ministry among the seasonal workers here.” I thought about how the workers could be reached. I wondered what time of the day or what time of the week they could assemble. I thought a little about what means would be effective and I wondered what kind of Christian ministry existed.

I overheard the owner of the shop engaging customers in lively, friendly conversation. At one point she said something that surprised and delighted me. She said, “I have three daughters and they have each accepted Jesus Christ as their Savior, so I feel like I have been successful.”

God has at least one joyful witness on the Island. She was winsome and conversational about the way she brought the name of Christ into play. The way she turned the conversation toward Christ reminded me of the way Jan Karon writes. In Jan Karon’s stories of Mitford spiritual truths are always there, woven very tactfully into the storyline.

When I left I handed her my card with a note of encouragement on it. Later I came back with Lois and the girls. We introduced ourselves to the owners and talked. Their names are Diana and Bruce Rochawiak. They winter in Lansing but during the summer they sell coffee and stuff to go with it at the J. L. Beanery Coffee House on Michigan’s Mackinac Island. They charge a fair price for good coffee and they keep some tasteful Christian devotional books on-hand for their customers.

Diana introduced me to her pastor and gave me a copy of a book he had written, then she showed me a piece of paper with an original poem written on it. It was a beautiful poem about the State of Michgian. Diana said it was written right there in her little coffee shop. It was signed by the author, Gloria Gaither.