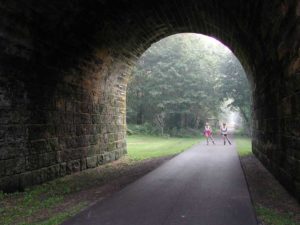 “You need to get more exercise,” they said. But when you weigh as much as I did that’s not as easy as it sounds. And on a perfectly innocent-looking day a few years ago it landed me in trouble.

I had talked my then thirteen year old son Kyle into a bike ride with me. We were biking the Kokosing Gap Trail in Mt. Vernon, Ohio. It was a beautiful path along a river built on an old railroad right of way. Most of the trail ran through a cool tunnel of shady trees. Kyle was riding his mountain bike. I had borrowed an antique brown single-speed girl’s bike from my wife. Bad idea.

We started at the trail head in Mount Vernon and rode to Gambier. The village of Gambier is the home of an old Episcopal College. It sits on a hill above the river. The shady streets are lined with old stone college buildings and tasteful homes. The college bookstore was a favorite spot for us. We stopped there for a cold drink before making our way back down to the trail.

The next village was Howard. We pedaled under a high stone arch where Route 36 passes high over the trial. The trail runs away from the river through corn and bean fields between Howard and Danville where the trial ended. We planned to turn around there and make our way back. It would be fun to brag that we biked the whole trail. But that was not to be.

It was about a mile from the end of the trail we ran into trouble. More accurately I ran into trouble. The bike I was riding was old and rusty and the chain broke. We were miles from the car. I needed some exercise but I didn’t want that much. I di

dn’t know what to do. It was a few miles to the nearest phone. No one was home at the time even if we did get to the phone. If I called a friends they would mock me forever for riding my wife’s old bike and breaking the chain. I’d rather they find my body and figure I died in some heroic struggle.

Suddenly an idea came to me. When you weigh over 250 pounds you have a big waist and when you have a big waist you have a long belt. My belt was long enough that it would function well as a make-shift tow line. Kyle was willing. I handed him one end of the belt, I took the other and he towed me all the way back to the car. It was really a nice ride. I didn’t even have to steer. I sat upright and took in the view.

Kyle is a robust twenty-year old in peek physical condition now but at the time he hadn’t had his growth spurt yet. I’ll hand it to him. He didn’t let up all the way back to the car.

While we were putting the bikes back in the van he said; “Hey, Dad. Why didn’t you ride and pull me?” I smiled. Maybe I was fat, but I wasn’t stupid.

When you are out there miles from home on the trail it’s nice to know you are not alone if you get into trouble. That’s why it’s a real good idea to travel in twos as often as you can.

I’m pretty sure Solomon never rode a bike be he understood the value of a friend when you get in a fix. He said it like this; “Two are better than one. for if they fall, one will lift up his companion, but woe to him who is alone when he falls.” (Ecclesiastes 4:9-10 NKJV)