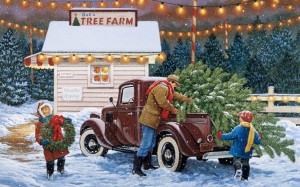 A Classic re-post from 2001 We went on our annual Christmas tree excursion Saturday. If you don’t have beautiful fluffy white snow blanketing the brown earth, bright sunshine on a cold winter day is the next best weather for getting the tree. We stopped for donuts and cappuccino. On the way we sang a few carols.

At the farm all ten of us spilled out and hiked back a lane and over a little hill to where the trees grew. Most of them were huge but there were still dozens small enough to fit into our living room. We searched up and down long rows of trees and among stumps of last year’s choices. Eventually we complied a short list of finalists. We all offer our opinion but the final decision is always left to mom.

Finally we settled on a beautiful Douglas Fir. I knelt to cut its umbilical cord and make it ours. It has been growing there just for us since about 1993. It’s a year older than Wes and a couple years younger than Dan.

Through the long warm days of seven summers it has stood on that pleasant hillside. On the fresh rain of seven springs it thrived. Seven winters flocked its branches with snow. And the geese of seven gold and auburn autumns passed over it by moonlight.

Somewhere this spring someone will plant the tree we will gather around Christmas of 2010. By then our family should have grown. Somewhere a the tiny tree is taking shape around which our oldest son will celebrate Christ’ s birth with his new wife five years from now. We’re not sure who she is yet but she is out there somewhere waiting for him, just like their tree.

Our tree grew up gracefully within sight of the farmhouse a few hundred feet back of the barn surround by its kin. It sheltered fowl and shaded rabbits and ground hogs and squirrels and deer. Incredibly we adopted this beautiful creation of God into our family for the paltry sum of only ten dollars.

Kyle and I carried it back to the van and put it on top. On the way back to the car with our tree it occurred to me that at a place where you can cut your own tree for only ten dollars you should not expect many extras. It is unlikely that they are going to shake it, trim it, bind it, tie it on top of your car and offer you a train ride and hot chocolate for a family of ten. We had noting to secure it to the top but a set of jumper cables.

I asked Wes who is now a strapping six-year-old if he would mind riding back on top of the car holding the tree on. It was only about fifteen miles. He said he would but he forgot his gloves and he thought his hands might get cold. They don’t make kids as tough as they did when my grandpa was a kid. So we used the jumper cables.

We were able to get to a little store and buy a bungee cord to secure our treasure. (The bungee cord has got to be one of the greatest innovations of civilized humanity since the invention of the wheel).

I love Christmas. The birth of Jesus was predicted all the way back in the book of Genesis. The prophet Isaiah announced the virgin birth of Jesus seven hundred years before it happened. For years we will remember our Christmas celebration because God has had it on his mind for all time. I’m glad he plans ahead better than I do.