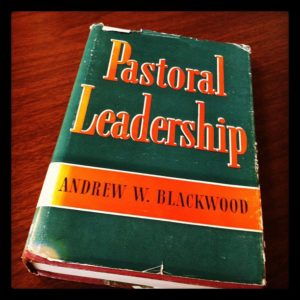 Puttering around among my books I spot and old book of pastoral theology passed down to me from my grandpa’s modest library. I take it in hand and turn it over a few times, enjoying the weight of it. Something about it tugs on my memory. I open it. Suddenly it comes back to me why this is a very special book.

Grandpa had great eyesight. He always said that when he was in the Navy he was tested and told he had rare 20/10 vision. (I guess that’s twice as good as normal vision). This may have been one of the things that made grandpa a skilled hunter. He was a keen observer of nature. I’m sure the eyesight was especially helpful.

We were on the tractor chugging up the lane aimed at the gate to the field on top of the North hill one mid-summer day when, without speaking, he stopped the tractor and pointed toward the ground.

“Theres’s four-leaf clover right over there. Those are pretty rare why don’t you jump off and pick that.”

I strained eyes. I couldn’t see it. “Where, grandpa?”

“You can’t see it there? It’s about two feet out to the right of the front tire.”

I couldn’t see it.

I noticed the wide blue sky. I saw the wispy white clouds and the colorful birds that occupied the wide blue sky. I noticed the silvery ripples in the pond in the morning breeze and the glassy surface of an evening calm. I stood in quiet mediation watching how the slanting light of the sun reflected on the water in the deepening dusk. I saw the insects that skittered on the surface of the water in the evening and the circles in the water where the bass would rise as darkness was coming on.

I noticed the graceful way the Maple leaves waved in the wind. I noticed how the leaves of the Maples were minty green in early spring, a light pastel, how they would turn to a rich dark green in summer and then in the shorter days of September begin to blush with color until they displayed their full dying glory against the deep blue October sky. I noticed how by mid-November the wind would blow the Maples bare to leave a stark pencil sketch where the month before there had been a beautiful water-color of a tree.

I noticed the feathery tassels over the corn growing in artful bands on the hillsides and the green pasture growing between the bands of corn. The symmetry-the artistry of a well-groomed hill farm draws my attention to this day-how the crops lay like a mantle on the shoulders of the hills.

I noticed the country noises and the absence of suburban sounds. There was not a highway within miles. The nearest paved road was miles away–Martinsburg Road and that was a lightly-travelled undulating, curving, scenic farm road.

The farm was bisected by a gravel road. There we only a few farms on the road. The mail truck would pass once a day. Only a few cars a day passed the farm. If you were within site of the road when a car passed it would be a great social affront not to raise your head and wave your hat or hand in greeting. The locals would consider you odd and anti-social the talk at the coffee shop would go like this; “You know I was out passed the Kaylors the this morning. I don’t know what’s gotten into him. He didn’t even look up.”

You could hear the tires on the gravel and unless there had been a rain within a few days a plume of dust would rise and fall after the car. Once the noise of the passing car or truck fell away the country sounds would be amplified in the quiet.

I noticed the lazy grazing of the cows and how they would always cluster together. I noticed how the cows would graze over to the fence-line in the east and eat away the low-hanging branches leaving a neatly-groomed appearance. For the rest of my life I would notice when livestock or deer would trim the trees and leave the forrest with a park-like grooming along the edge of the wood.

I noticed the pasture in spring green as Ireland. I noticed the bleached white of the limestone in lane and in the two-tracks over the hills. I noticed the blue and purple paint of the hills rolling off into the distance and the cloud of condensation left by a jet thousands of feet overhead silently streaking white across the sky.

I noticed the smell of the barn, a wonderful mix of manure, hay, grease, faint exhaust from the tractor, molassas in the feed, and ancient timber aged by moisture and sun and years. The barn on a working farm has a fragrance, a beautiful perfume you could only appreciate if you cherished a few summers in the country.

I noticed a lot if things, but grandpa had a way of pointing out things I overlooked.

I let go of the fender and jumped down from the draw-bar where I was standing and walked over in the direction of where he was pointing and tried to search every inch of the ground. He throttled-back the engine, took the tractor out of gear, set the brakes, let out the clutch, slowly got off, walked over, bent down and picked a four-leaf clover. I watched him do this more than once. He held the clover up for me to see and then put it in the pocket of his chore coat.

At first I thought it was a prank. I thought he had a four-leaf clover in his pocket and he would do a little slight-of-hand when he bent over the “pick” the four-leaf clover. I expressed my doubts so the next time he made me look at the clover and confirm it and pick it myself and hand it to him.

When we returned to the house he would walk over and pick a thick book of pastoral theology, a hard cover book with a green dust-jacket, and he would open the book and press the clover between it’s pages. The book was called Pastoral Leadership, by Andrew Blackwood.

I’ve had my meetings and closed out my tasks for the day. The phone is silent. The others have gone for the day. I prepare to turn off the lights and go home for supper. The church is quiet.

In the solitude of my study I sit among my books for a few minutes hold this old book in my hands. How long has it been? I calculate the years that have passed. It’s been 40 years since we found some of the clover pressed between these pages. The memory draws my heart back to the summers of my youth. I begin to slowly fan it’s pages. I’m in no hurry. There are ten or twelve places I find with four-leaf clovers pressed between the pages.

For the first time ever I begin to carefully turn every page of the book to see if there was anything I have overlooked in the years my grandfather’s book sat on my shelf. I find an annotation. It is my Dad’s careful printing. This book had belonged to my Dad. He had given it to grandpa and then Dad gave it to me after grandpa’s death knowing the significance it would hold.

Inside the last few pages is something I have never seen before, a number of four-leaf clovers in a cluster, maybe twelve or fourteen of them.

Grandpa would die within ten years of the afternoon we pressed the clover. A quarter of a century later we would bury grandma next to him in the old Wilson Cemetery. I would meet and marry Lois and serve pastorates in Ohio and Michigan. Our eight children would be born and all that busy time this book would sit silently on my self unnoticed. Years would come and go.

This afternoon, enjoying the quiet luxury of my study I hold the old book in my hands and I feel a connection across the states and the decades to the little farm in the hills of Ohio and and a rare mid-summer afternoon.

I have my grandpa’s last Old Schofield Reference Bible. It is stamped REV K D PIERPONT in gold foil. I have the set of Ellicot’s Commentaries that belonged to him and I have the book on Pastoral Leadership by Andrew Blackwood. Between it’s pages are little plants of green that one day grew out of the soil that lay on the hills of the old farm. Few other physical things remain. I put the book carefully back in it’s place. I turn off the lights and start for home with a thoughtful heart.