Hear me tell this old chestnut of a story by clicking here: Of Trees and Truthfulness 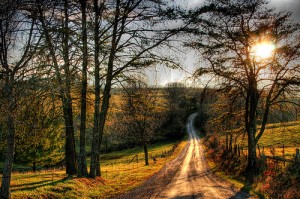 This story is an old chestnut I have been telling for years. It is a rare story. A man only gets a few stories like this to tell in his lifetime. I first wrote it about twelve years ago. (2-18-2012)

It had been years since I had seen my grandfather’s old farm. It was sold about fifteen years ago. When we moved into the area and I wanted my wife and children to see the place that had meant so much to me growing up.

Off the main highway we wended through the countryside on familiar gravel roads. Every mile was a treasury of memories and stories to tell. Up Sadie’s Hill which was always such an adventure in the winter, past the Burger’s place and around the last bend before the farm would come into view.

The pond seemed so much smaller than I remembered. The raspberry patch behind the house was gone. My favorite tire swing was missing from the big oak across the lane from the house. Some of the outbuildings had given way to the years. The farm was not as I remembered it. But one thing caused me to catch my breath in surprise.

At Christmas time we would always crowd toward the window of the car as we took the last turn in the road. The farm lay in the valley below and we would and strain to see the lights on the little evergreen beside the spring run. One Thanksgiving I remember helping Grandpa decorate the tree with a six-foot stepladder.

The tree was still there, but it towered over the old two-story farmhouse. The little pine by the spring run was now over forty feet high!

The next time the family was together, I told Grandma about how the tree had grown. Dad laughed and assuming a Paul Harvey-like voice said; “How would you like me to tell you the rest of the story?”

Years ago Dad and his younger brother Bill skipped school on the opening day of rabbit season to hunt with Grandpa. Grandpa gave his approval on the condition that the boys would not lie when asked the reason for their absence. They took the deal and skipped school to hunt rabbits with their dad. Evening came quickly and after a nice dinner with fresh meat the boys tumbled into bed, but they would face the judgement at school the next day.

They weren’t alone. The boys were called upon to account for their absence the following day. They joined a long line of boys at the Principal’s office. Most of the other boys claimed there were sick. (They were sick of having to go to school on opening day of rabbit season). Dad and Bill, true to their word, told the truth. “we were rabbit hunting with our dad,” they said. “Are you sure you weren’t feeling just a little under the weather, boys?” the Principal asked. “No, sir, we were feeling fine, and we were rabbit hunting with our dad.”

The gavel dropped and the sentence came swiftly. They would stay after school one hour each night until they had made up the time they had missed.

On the final day of Dad’s punishment the teacher, out of sympathy, walked back the aisle where dad was sitting and gave him a little gift. It was tiny start of a pine tree in a cut-off milk carton. It didn’t seem like much of a compensation for the suffering he endured, but he carried it home. That night Grandpa and Dad set it out in the back yard of their home on Bowers Avenue in Newark, Ohio.

A few years later Dad was serving in the Navy in Korea, Bill and Aunt Ann were married and gone. My grandfather realized a life-long dream. He and grandma were able to buy a small farm north of town. Nestled in the hills were he had grown up. Along with their other belongings, Grandpa took the time to dig up a little pine tree and set it out at the base of the hill by the spring run.

It’s always been a source of beauty. It’s a haven for birds. In the winter its branches are flocked with snow and glow with multi-colored lights. It’s fed year round by the spring at its feet. But I know that it is more than that. It is a forty foot tall monument to the virtue of truthfulness.

Someday, I’m going back to Ohio. I’m going to turn off State Route 13 at St. Louisville and wind my way on gravel roads back to the east. I’m going to go back up Sadies’ Hill. I’m going to remember the time grandpa had to get the old Massey-Ferguson tractor and come and pull our car up the icy hill to get us to the farm for Christmas. I’m going to visit the new owners of the old farm and I’m going to tell them what a treasure they have growing in their front yard.

“The truthful lip shall be established forever, but a lying tongue is but for a moment.” (Proverbs 12:19 NKJV)

A Woman Alone on the Road