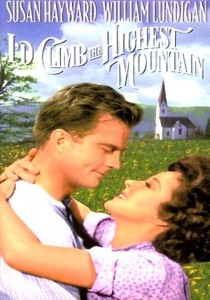 Last week I watched a lovely old movie about a newly-wed pastor and his young, beautiful wife. The movie follows their first three years serving a rural Methodist circuit charge in the Blue Ridge Mountains of northern Georgia. In the movie the pastor was a good guy. That should tell you it was an old movie. Pastors in modern movies are usually oily charlatans trying to get into people’s pockets, week men who are unprincipled and can be bought and sold cheap. They are usually hypocritical and immoral, or effeminate and inconsequential characters. Pastors are rarely principled men of commendable character in modern movies.

This movie is eight years older than I am. The scenery is lush, the churches are quaint, the people are simple and the Pastor is a good guy. The story is told from the wife’s point-of-view. She is a girl, learning to be a wife. She is a girl from the city learning country ways. She is a young woman learning to partner in ministry with her pastor husband.

Together they minister for three years amid a contrast of saints and problem parishioners, believers and doubters, triumphs and tragedies, They endure hardship and disappointment but they are happy and they are in love. They learn and grow and serve nobly and leave honorably when their church moves them to a new assignment.

When I’m done with what I do here I’m sure you will want to watch the movie so I won’t spoil the plot, but let me say the movie ends well. It is a wholesome, heart-warming film to watch.

As always there is a story behind the story behind the movie. The movie’s title is: “I’d Climb the Highest Mountain.” It is based on a book by Corra Harris written in 1910 entitled: “A Circuit-Rider’s Wife.” They say the book was loosely autobiographical. Corra Harris was a pastor’s wife. Her first years of marriage were as the seventeen-year-old bride of a circuit riding Methodist pastor. She wrote at least partly from financial necessity. Her pastor husband died at his own hand in 1910 after she had had to endure his alcoholism, depression and eventual adultery and desertion. They had three children but only one survived into adulthood. Corra would outlive her daughter by sixteen years.

She had a troubled and difficult life, but she had beautiful stories to tell. Maybe in writing A Circuit-Rider’s Wife she was telling the story the way it should have read. I imagine so. Maybe she was recalling with little romanticism the early and happier days of her youth as a seventeen to twenty-year-old circuit-rider’s wife.

I’ve not yet read the book, but those who have would say she hoped the story would alert the Methodist Church to the hardships of rural pastors. She was not satisfied that it ever did. The book did sell well and made her a popular writer for a time and provided for her a place in the heart and history of her native state. She was able to travel and purchase a unique log home there which she named The Valley. It was there in The Valley wrote her stories.

Your life is not exactly the way it should have been, I’m sure, but that doesn’t mean you have to become hard as stone. Difficulty does not have to crush your spirit or strangle your imagination or poison heart. Hardship is often the rich soil where dreams are planted by faith and grow into beautiful flowers and nourishing fruit.