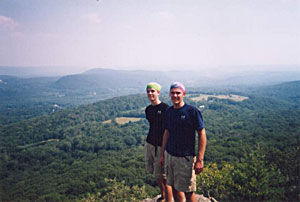 My two oldest boys hiked a section of the Appalachian Trail a couple years ago. I even have a picture to document their adventure. They came back with some neat pictures and tales to tell that will endure long after the pictures are gone.

There is an interesting tradition on the Appalachian Trail. Along the tail, hikers and locals would perform acts of kindness and goodwill to help hikers on their way. Often this involved food, because it is difficult to pack as much food and your body requires while slogging non-stop through the wild. Hikers call this custom “trail magic.”

In Massachusetts there is a lady who leaves chocolate chip cookies on her porch for hikers. Some leave water along the trail. Others offer rides to town. When my boys were on the trail a man hitchhiked into town and brought back a huge stack of pizzas which drew a crowd of famished hikers immediately out of the wilderness. At The Presbyterian Church of the Mountain in Delaware Water Gap, Pennsylvania the people of the church have a weekly all-you-can-eat pot-luck dinner for hikers. People find that one of the things that helps them endure the rigors of the trail is tail magic along the way.

Trail-hikers or not people everywhere are on a hard venture. Everyone you know is struggling forward against some difficult problems. Maybe you should consider a little “Trail Magic” every day with strangers and friends. Salt your day with quiet, anonymous kindnesses and simple good deeds. They make the hard trek of life bearable. In Scouts they always said, “Do a good turn daily.”

Last year, running a half-marathon a woman was playing the theme from Rocky on a boom box by the side of the road in the first mile. I smiled at the elderly lady as I ran by fresh off the starting line. The course looped out and back along Lake Michigan. Within a mile of the finish I was nearly spent I was physically almost out of gas. I was pressing forward on shear determination and the grace of God when I caught the strains of Rocky again. The elderly lady was still there playing the same song. This time the music and the tiny elderly lady made me choke back tears.

It doesn’t take much to encourage someone whose strength and courage is at low ebb. Just a little trail magic may be all it takes to propel them to the summit of Katahdin.

While I was writing this someone informed me that there were a couple young men who were riding their skateboards on our property and damaging our concrete flowerbeds by “grinding” on them. I went out to stop them. It was hot. They were kind and willing to move along. After they agreed to go I said; “It’s sure hot today, would you like a Coke?”

They came into the air-conditioned building. “Wow, it’s nice in here.”

I got them a couple ice-cold vanilla cokes. They thanked me warmly. I said, “You guys have a good day.”

We don’t live on the margin of the Appalachian Trail. We don’t climb summits and pose for pictures on escarpments over grand vistas, our journey doesn’t start at Springer Mountain and end on Kathadin, but that doesn’t mean we can’t still leave a little trail magic around for fellow trekkers.

A Christmas Gift From Heaven