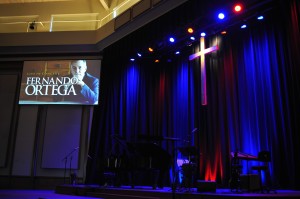 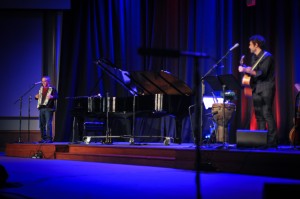 Last week Lois and I enjoyed a wonderful date (we took Hope America as a chaperone). We went to a concert together in Ohio.

Lois and I disagree on a lot of small things and we really agree on some big things. One of the things we agree on is our favorite singer outside our own family: Fernando Ortega. The evening was everything we hoped it would be. The concert was in Ohio. We arrived early enough to have something to eat and explore the idyllic little village of Hudson. We even found a delightful little indie bookstore creatively named: The Learned Owl.

We had seats stage left in the front row. Fernando sang and played a beautiful full grand piano. He had a versatile musician named Gabe Scott with him who could play the guitar, sing, play the djembe (I just discovered that word started with a “D”), and the steel guitar. I suspect he could also play the hammar dulcimer, too because one was set up there, but it was never played. (Kind’a cruel, I thought).

Fernando did sing his signature song “Children of the Living God,” and told the humorous story of an Amish girl named Esther who he met on a cruise. (That’s right. He met a plain-dressing Amish girl on a cruise)

It was a peaceful evening of singing and storytelling. Fernando is a gifted storyteller. He has and easy, natural style much like his music. I’ve listened to Fernando’s songs almost every day for the last about fifteen years so it was fascinating to hear the details of the stories behind the songs. He was in an unusual storytelling mood that night. I was so glad Lois and Hope and I could share the memory of a perfect evening.