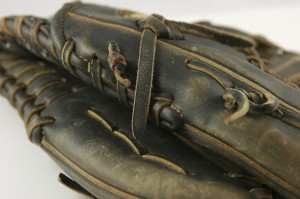 Every time we pass the Meijer Department Store on 28th Street in Grand Rapids I say; “That’s where I got my first ball glove.” And the family groans. Sometimes I don’t think they appreciate tradition like I do.

I get to Grand Rapids about three to five times a month to make hospital calls. A couple of times on a spring day I’ve gone out of my way to Francis Street to drive slow past a house where we used to live. It was the house we lived in when Dad was in Vietnam. The people who live there now have widened the driveway I used to shovel for a dime. The new driveway is over a little strip of grass where my Dad taught we to catch a baseball on a gentle evening years ago.

My dad was busy. He was a seminary student and worked at a grocery. He was not yet thirty. One spring evening he said; “You need your own ball glove.” We got in the car and drove to Meijer’s Thrifty Acres. I remember it well, because the roof line of the building forms an arch.

We walked back the aisles and chose a nice leather glove. Inside the palm the price was written with a marker pen. “5.95” On the way home Dad gave me a little talk about caring for the glove and breaking it in. He is a frugal man who takes care of things. He said; “If you take care of a good ball glove like that one, it wall last you for years. Some people have one ball glove all their life.” I took care of it and kept it for at least twenty-five years. It never wore out. Dad never had to buy me another glove.

After dinner my Mom and sister did the dishes and Dad and I went out beside the driveway on a little strip of grass under a Maple, and it was there he taught me to catch a baseball. I was an eager student and I will never be able to explain it but there is something about the exchange of a baseball between a father and son. I can still hear his instruction and encouragement. Sometimes he would get a little frustrated because I could not make the ball go where I wanted it to go. To encourage care, he sometimes had me chase the ball.

“Use your meat hand, son. Don’t throw wild. Take your time with the throw. Aim for the glove. O.K. you run for that one, buddy. Watch for cars, now. There you go. Try again. Nice throw. That one was almost too hot to handle.”

The sun got low in the sky and when we couldn’t see to throw any more. I went in and got ready for bed. We prayed and I put my new ball glove under my pillow. I put it under there because my dad bought it for me and I didn’t want to lose it. I thought it might help break it in and I liked the smell of the leather.

It was a great ball glove. I used it all through Little League, and even for softball in college. It must have been one of the best investments my Dad ever made. How can you put a price tag on a memory like standing under the shade of a leafy Maple on a summer evening and listening to the pop of the glove and smelling cut grass and leather and lilac all mixed together. I would still have it today, but somehow it was misplaced and lost. I think it got mixed in with some clothes that were taken to the Goodwill. I like to imagine it’s under some little fella’s pillow tonight — but then I have an imagination as wild as my throwing arm.

Sometimes the wisest investment of time is to put down the paper and pick up your ball glove or get out your bike. Maybe years from now your child will drive down your street and her heart will be flooded with sweet memories of times you spent together.