In a little town in the Midwest. It doesn’t matter where. A young man hits fly balls to a couple boys in a field out behind the house. The field is littered with baseballs.

The sky is slate gray and spitting snow. The wind is cold. Determination is etched in the features of the young man. This is not the first time the boys have come here with their dad. They have been here every day for weeks. The young man hits the ball in the air and calls out 37. He hits another ball and calls out 37. Over and over again he tosses a ball in the air and hits it to one of the boys calling out a number every time.

Halfway between the boys and their dad and little girl in mittens picks up the balls the boys have thrown in and relays them to her Dad. He keeps hitting and the boys keep catching until each of them has caught 100 fly balls. While they gather the balls the back door of the house opens and their mother calls them in for supper.

They will be back again tomorrow and every day Monday through Saturday for weeks. They will not miss a single day.

It’s evening in the park and lovers stroll by the lagoon. Fireflies will begin to flicker over the grass within an hour. The sun is low in the sky and their air is cool.

Lights come on over the baseball diamond. The game is down to the final out. Families are all gathered around. Grandmas in lawn chairs. Moms talking to each other. Dad’s pacing the fence calling out advice.

At the crack of the bat everyone looks to see the ball arch out to right field. Beneath, on the outfield grass a boy turns and runs back three steps to his left. He settles under the ball. He pats his glove. He looks into the air raises his glove. With a “spat” the ball lodges in the glove. He jogs in. The game is over.

His dad tousles his hair and puts his arm around his shoulder. They walk slowly toward the car. There is a light in the boy’s eyes and a smile is on his face. The game ball is tucked away in his glove and in his heart is tucked away a memory of hard earned success. Payday for a lot of hard work. It will be the first of many. 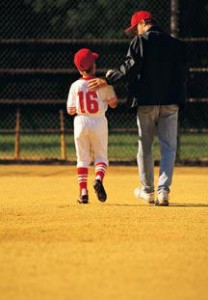 It’s Not a Real Bear