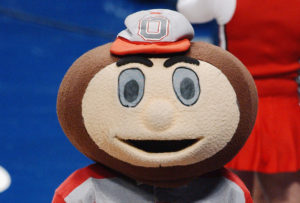 You don’t find many self-proclaimed Buckeyes as far north as Newaygo County, Michigan. That’s why I was a little curious about the fellow behind me in line at WalMart that day about five or six years ago. Usually Buckeyes don’t do too well that far north.

From childhood I have been taught to think of people not just as fellow occupants of this planet but as people with eternal souls destined one day for heaven or for hell. Because that is true I am always looking for opportunities to nudge people toward Jesus and get them thinking about things that matter most and last forever.

That’s what I was thinking when my first conversation with Lee was coming to a close. What could I do in our short encounter to nudge him toward the Kingdom and help him see the beauty of Jesus and the reality of eternal things. An idea came to me.

“Say, Lee, since you are new in town have you found a church yet?

“Well,” I said, “Us Buckeyes have to stick together up here. It gets kind of lonely sometimes. You’ll have to come and hear me preach some time.”

He smiled politely and I gave him my card. “Give me a call when you are going to visit and I will tell you the times of the services,” I offered.

I have been a pastor all my adult life and I have invited hundreds of people to church. Most of them didn’t come. I didn’t really expect Lee to either but it was at least an overture. That Sunday Lee didn’t come but he did go home and tell Pam about meeting me and he considered coming.

Months later three little children a boy and two girls came into their lives. They wanted to adopt them and got to thinking that it would be good for them to be in church. They thought of me and gave me a call. The next Sunday they were lined up on a pew down to my left about four rows back on the aisle. I would see them there many, many times.

I visited their home and had the happy privilege of telling them of Jesus there at their dining room table. Later I would visit them at their shop and we would talk frankly of Jesus again. Many times they heard me preach and many times I talked personally with them about Christ.

I went with them to court when they adopted the children. I helped them renew their wedding vows one day. We gloated together when the Buckeyes won and we cried on each other’s shoulder when they lost.

I moved away. Last summer we bumped into them again when Holly came back to town to crown the new Baby Food Festival Queen. That was the last I saw Lee. Last week he gave his last forty dollars cash to his wife, so she could go out for the evening. He helped move a new dinning room set into the house, moved a little snow, came in the house and died in his chair. He was only sixty-one years old.

Today I will preach his funeral. I will use as a text Psalm 90. Psalm 90 is the prayer of Moses about the brevity of life and the importance of thinking on eternal things.

I was to be named to an important board this morning back home but I got up early and drove across the state three hours back to my old parish because I liked Lee and I know he liked me. His wife, Pam is convinced that he had placed his trust in Christ before he died. He was buried in a Buckeye sweatshirt. I hope I see him in heaven someday. (February 2004)